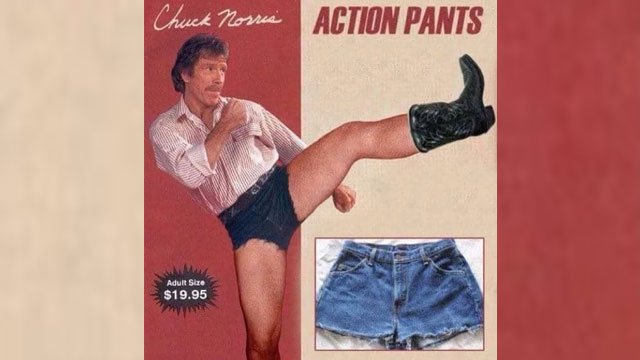 • BrandedInThe80s: I have no idea what “action pants” are. The above image is apparently photoshopped, but Chuck Norris did reportedly front a line of stretch jeans back in the 80s.

• Kenneth-in-the-212: Hit the link to check out Kenneth’s weekly round-up of the what’s what in LGBTQ publications like the latest issue of DNA Magazine featuring cover guy Airon Mallars.

• Edge Media: A new poll from Gallup shows that 66 percent of people favor allowing openly transgender people to serve in the military. However, 62 percent of Americans say trans athletes should only be allowed to play on sports teams that correspond with the sex they were assigned at birth.

• The Advocate: Internet sensation and renaissance man Leslie Jordan made his debut at the Grand Ole Opry last weekend sporting a custom-made electric blue suit with fringe and hand embroidery. The appearance was in support of his gospel album Company’s Comin’. Said Jordan, “I grew up in the shadow of the Grand Ole Opry. So you know, it’s like a mecca to me. To be invited and to get to do three songs, it’s a big deal.”

• OUT: In a video clip that went viral, a 13-year-old trans teen was viciously attacked in the hallway of her middle school in South Florida by a bully. Equally disturbing, other students circled around the teen laughing and kicking at her while she struggled to stand up. The school and police say they are investigating, but a week later no disciplinary action has been announced.

• JoeMyGod: The last on-air liberal has left Fox News as former DNC chair Donna Brazile and Juan Williams of “The Five” have both departed the right-leaning network. The New York Times reports that “Fox News has adapted to the post-Trump era by moving in a single direction: Trumpward.”

• Pink News: A furious ‘Karen’ demanded to speak to the manager of the entire airport and got the response she deserves. The woman went from “I’m a women in a dress” to “You F’off” in a nano second.

Because I noticed that, those tears dried up pretty quick when the facts came out