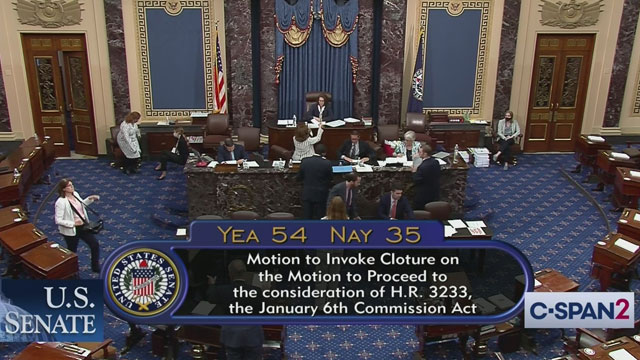 I don’t know how Republican Senators can say they ‘back the blue’ when they vote against a commission that would investigate the January 6 invasion of the U.S. Capitol building that resulted in one police officer dead and 100+ injured.

Republicans on Friday blocked the creation of an independent commission to investigate the Jan. 6 Capitol riot, using their filibuster power in the Senate for the first time this year to doom a full accounting for the deadliest attack on Congress in centuries.

With the vast majority of Republicans determined to shield their party from potential political damage that could come from scrutiny of the storming of the Capitol by a pro-Trump mob, only six G.O.P. senators joined Democrats to support advancing the measure. The final vote, 54 to 35, fell short of the 60 senators needed to move forward.

Modeled after the inquiry into the Sept. 11, 2001 terrorist attacks, the proposed panel of experts would have been responsible for producing a report on the assault and recommendations to secure Congress by the end of the year.

Eleven senators, almost all Republicans, skipped the vote to head out of town for the holiday weekend.

Eleven senators were absent for the procedural vote. All Democrats present voted yes and six Republicans joined them:

Before the Senate vote, Gladys Sicknick, the mother of fallen Capitol Police officer Brian Sicknick, said that not investigating the January 6 attack would be “a slap in the faces of all the officers who did their jobs that day.”

The January 6 attack on the Capitol was a truly painful day. Why is Mitch McConnell blocking a bipartisan commission to investigate what happened? The brave law enforcement officers who defended us and the Capitol deserve so much better.

Mitch McConnell would rather bury the truth than take responsibility for enabling Trump as he fomented the insurrection. pic.twitter.com/oKaCKtUnv1