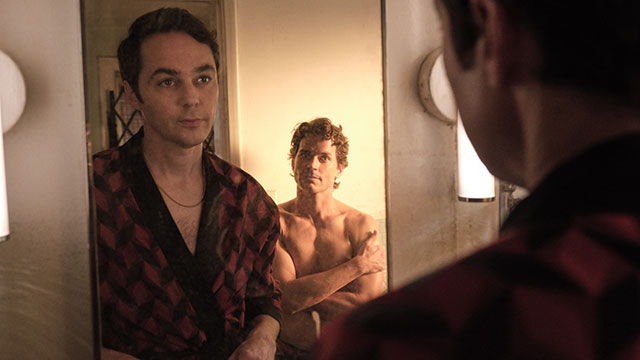 • EW: Netflix has released the first look photos (above) of the upcoming movie version of the acclaimed Broadway revival of The Boys in the Band set to premiere September 30. The cast of the Tony Award-winning production is reuniting for the film including The Big Bang Theory’s Jim Parsons, The Sinner’s Matt Bomer, NOS4A2’s Zachary Quinto, Black Monday’s Andrew Rannells and Tuc Watkins, Teen Wolf’s Charlie Carver, and Unbreakable Kimmy Schmidt’s Michael Benjamin Washington.

• Washington Blade: The State Department has stubbornly appealed a federal judge’s ruling that said it must recognize the U.S. citizenship of a gay Maryland couple’s daughter who was born in Canada via surrogate. Section 301(c) of the Immigration and Nationality Act that states “a baby born abroad to married parents is a U.S. citizen at birth when both parents are U.S. citizens and one of them has resided in the United States at any point prior to the baby’s birth.” Both parents are citizens, both had resided in the U.S.

• Vice: A member of a Facebook group dedicated to taking pictures of loaded weapons pointed at their d*cks finally shot himself in the balls, according to photos and video he posted on social media. The apparent point of the private group Facebook group “Loaded Guns Pointed at [B]enis” is to somehow ‘trigger the libs.’ I’m not sure how shooting your own junk ‘owns the libs,’ but you do you, boo.

Now these MAGA dolts are pointing guns at their dicks with the safeties off and their fingers on the trigger to own the libs. I fucking hate it here. pic.twitter.com/O1vVUldLn5

• Journal Sentinel: Vandals burned a Joe Biden yard sign, a Pride flag and an American flag at a home in Waukesha County, Wisconsin. “I think it was (a) hate crime ‘cuz someone started the pride flag on fire,” the owner said. “We felt targeted.”

• KIT212: Check out Kenneth’s round-up of the latest in local LGBTQ publications.

• Washington Post: Trump’s latest attempt to shield his tax records from the Manhattan district attorney was rejected Thursday by a federal judge, who said Trump’s legal team failed to show the subpoena was issued “in bad faith.”

• CNN: Anderson Cooper spoke with MyPillow CEO Mike Lindell about his campaign for an herbal “cure” for COVID-19 called oleandrin based on the oleander plant. Lindell has no background in medicine or science, but he does donate big bucks to the GOP and is a member of Donald Trump’s inner circle. Oh, and Lindell was added to the board of (and received a financial stake in) Phoenix Biotechnology, which produces the supplement. Trump is now touting the supplement as well.

Anderson Cooper tears into the MyPillow guy for pushing unproven coronavirus therapeutic as a “miracle” cure:

“You have no medical background. You are not a scientist… You are now on the board and going to make money… How are you different than a snake oil salesman?” pic.twitter.com/6cQIn1FYpA