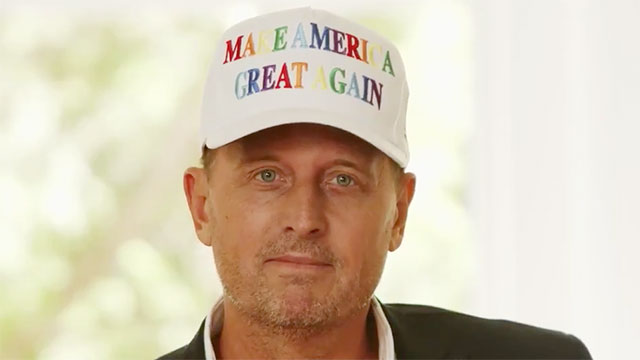 That’s certainly some serious hyperbole (and a lie), but it was right up the Donald’s alley as he retweeted the clip with the caption, “My great honor!!!”

The video, which has been viewed over 5.2 million times on Twitter at this writing, is meant to attack former Vice President Joe Biden’s record on LGBTQ issues.

In the clip, Grenell (who briefly served as acting Director of National Intelligence) points to Trump being the “first president in history to be pro-gay marriage from his first day in office.” 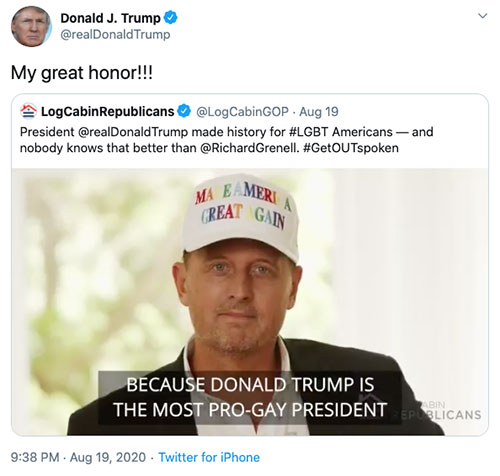 What Grenell doesn’t note is that marriage equality was the law of the land by that time, decided in 2015 by the U.S. Supreme Court. It’s not exactly an act of courage to acknowledge the law.

When asked about the issue shortly after his electoral win in 2016, Trump told CBS News reporter Lesley Stahl his personal view on the matter was “irrelevant” and that he considered the matter “settled.” He added, “I’m fine with that.”

Hardly a glowing endorsement of marriage equality. Especially when, during the campaign, he sent mixed signals about gay rights.

While Trump mentioned “L. G. B. T. citizens” during his nominating convention speech (in a halting cadence that sounded like he’d never used the phrase in his life), he went on to tell Fox News he would “strongly consider” appointing judges who might overturn same-sex marriage.

Grenell also mentions the Trump administration’s supposed push to end the criminalization of homosexuality around the world.

You might recall the initiative, announced to be headed up by Grenell himself, was unknown to Trump when he was asked about it. And, since the announcement of the campaign, there’s been no news or apparent action on the issue.

You banned transgender people from the military. Are you too stupid to know what the "T" in LGBT stands for? Just go away, you ignorant homophobic transphobic idiot!

Just this week, the Trump Administration intrinsically erased LGBTQ people from an updated foreign policy on gender and women’s empowerment by the U.S. Agency for International Development.

Throughout the video, Grenell ignores that transgender people even exist as he only uses the terms “gay and lesbian.”

Grenell also alleges that Biden believes “gays are security risks,” which is a pretty far stretch as Grenell is referencing an off-hand statement made almost 47 years ago.

Biden was reportedly ‘startled’ by a question about gays serving in the military and civil service at an informal event with neighbors in 1973.

According to the conservative Free Beacon, Biden responded, “My gut reaction is that they [gay people] are security risks but I must admit I haven’t given this much thought,” he said. “I’ll be darned!”

You’ll note Grenell doesn’t mention the incident happened back in 1973, and he also doesn’t include the part of Biden’s response that said he hadn’t given the subject much thought.

In reality, Biden’s movement on LGBTQ rights has pretty much mirrored the nation’s perspective.

He’s publicly evolved to become a champion for gay rights – most memorably coming out in support of same-sex marriage in 2012 just days before President Obama.

While Joe Biden has promised full-throated support for the Equality Act, which would extend existing civil rights protections to LGBTQ people, Trump and the majority of his fellow Republicans have stood firmly against the legislation.

If you want the facts, click over to GLAAD for an extensive list of Trump’s attacks on the LGBTQ community.

For information about Biden’s plans for LGBTQ equality, check out my report on his proposals for our community here.

What the fuck is this? Trump banned transgender people from the military! This tweet is such an embarrassment.

He’s literally spent his entire term tearing down Lgbt rights, access to healthcare, appointing anti equality judges, arguing against equality in the courts, and denying asylum to desperate people fleeing oppression. No one is here to congratulate a grifter like @RichardGrenell