Jake Tapper of CNN sums up Trump’s twisted version of reality that attempts to equate neo-nazis and those who protest them.

.@jaketapper: To act as if these intellectually destitute people have any moral standing is not only immoral, but un-patriotic & un-American pic.twitter.com/NqzAwxFqb4— The Lead CNN (@TheLeadCNN) August 16, 2017 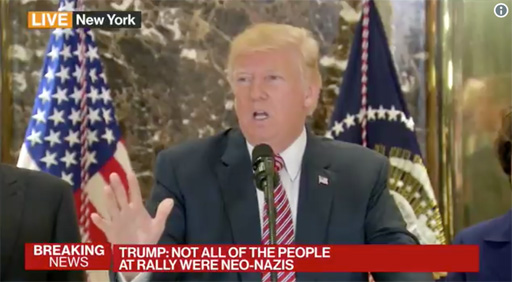 President Trump on Tuesday insisted that he did nothing wrong on Saturday when he declined to specifically condemn Nazi and white supremacist groups, asserting that “before I make a statement, I like to know the facts.”

In a long, combative exchange with reporters at Trump Tower, the president repeatedly rejected a torrent of bipartisan criticism for waiting several days before naming the right-wing groups and placing blame on “many sides” for the violence that ended with the deaths of a young woman after a car crashed into a crowd.

Mr. Trump repeated that assertion on Tuesday, criticizing “alt-left” groups that he claimed were “very, very violent” when they sought to confront the nationalist and Nazi groups that had gathered in Charlottesville, Virginia to protest the removal of a statue of Robert E. Lee from a park. He said there is “blame on both sides.”

Trump says not everyone at Charlottesville was a neo-Nazi or white supremacist https://t.co/LE4bzWCOWj pic.twitter.com/iJPg3ssR8C

President Trump on Charlottesville: “There are two sides to a story” https://t.co/UYpqI3w42L https://t.co/OQnTTHerZs

Donald Trump: “There were some very good people on both sides! Very good!” pic.twitter.com/ZhjzQiMNZB

There are no “very good people” marching with Nazis. Trump is pivoting to something else. If you march with Nazis you’re okay with Naziism. 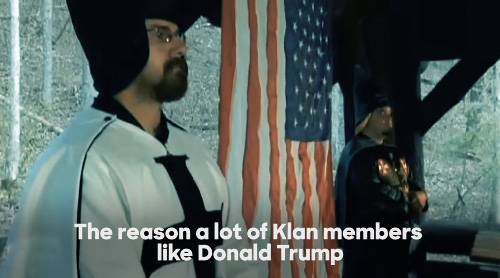