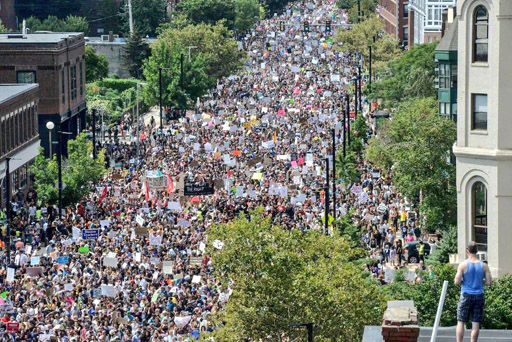 Thousands of counterdemonstrators marched Saturday in downtown Boston in response to a self-described free speech rally that had sparked concerns of possible violence.

Amid a heavy police presence, men, women and children from diverse backgrounds showed up Saturday morning to march from the Reggie Lewis Track and Athletic Center in Roxbury to Boston Common, the nation’s oldest park.

Some carried signs with messages such as “No Trump. No KKK. No racist USA” and “Americans against hate.” At times, they chanted “Hey hey, ho ho, white supremacy has got to go” and “Black lives matter.”

Police maintained a buffer zone between marchers and rally participants — averting major incidents except for occasional clashes and shouting matches between the counterprotesters and supporters of President Donald Trump.

Photos from the Boston rally and counter-protest.

Controversial rally in Boston has ended, police say. At least 8 arrested on what was a mostly peaceful day. https://t.co/iPNIPSrrQz pic.twitter.com/fqPbKnMUQa