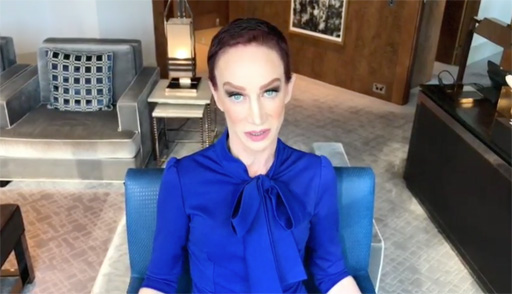 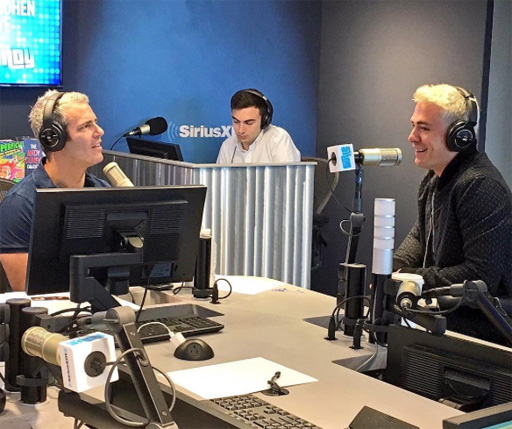 Speaking to Andy Cohen on SiriusXM’s “Radio Andy,” Arrow/Teen Wolf star Colton Haynes candidly shared personal details about his dating life including losing his virginity at the age of 13 to both a girl and a guy, albeit separately, and being set up on fake dates in Hollywood to hide his sexuality.

• “I lost my virginity at 13 to a girl and a guy. I’ve never said that before. The girl was two years older than me, and the guy was, I would say, around 16. Everyone participated. It was a real first time. It was exciting.”

• “I was literally told from the day that I moved to Los Angeles that I could not be gay because I wouldn’t work. Then I was with my management team and a team of people that just literally told me I couldn’t be this way. They tried to set me up with girls. I was rumored to date Lauren Conrad (of The Hills) for six months because they were kind of angling a story. And then I dated every other young person which of course I didn’t date.”

Haynes said his “dates” all understood what was going on. “They knew the whole time. It was like a Tab Hunter situation.” 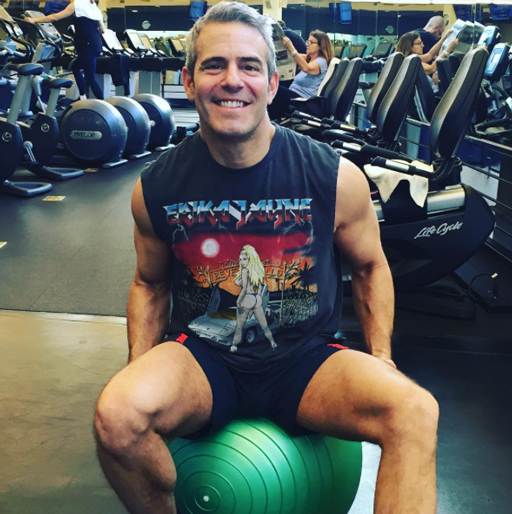 In an interview with Mic, Watch What Happens Live host Andy Cohen is asked about his experience with LGBT media. Apparently, Andy reads the Comments sections…

I think they’ve been fine. Any time there’s ever been an article about me on any gay sites the comments are always just the meanest you can imagine… but that might be par for the course. I’m proud to be the only openly gay late-night talk show host.

I’m now going into my eighth year of this so whether gay people like that or they don’t like it, I do know that there are young gay men across the country who maybe come to my book signings or have dinner with my mom and say “it’s touched me that I’ve been able to see a gay guy in late night.” So ultimately I can’t get too invested in what the comments say or what the gay media says because if there can be kids watching and thinking “oh wow, look, that guy is gay and he has this show and everything seems okay with him” then that should be the important thing.

If it were the only show about gay people on television then maybe that would be a topic of conversation, but we live in 2017, and there are gay people of every shape and size on many different shows. Have you ever been to Fire Island? It’s pretty white and chiseled. That’s what it largely looks like there. If we went somewhere else, it would probably look different. I think we should be happy with having another representation of ourselves on television. Maybe people should look at the how before they start protesting it.

Check out the full interview over at Mic. 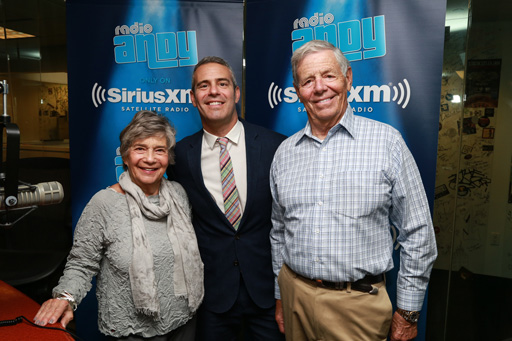 This Sunday marks National Coming Out Day 2015, and to acknowledge the day Radio Andy, Andy Cohen’s exclusive SiriusXM channel, will premiere “Free Advice with Ev & Lou Cohen” where Andy and his parents answer listener questions about a range of topics, share Andy’s coming out story, and more.

If you don’t currently subscribe to SiriusXM (I do) you can sign up for a free trial for SiriusXM Radio by clicking here.

Click below to hear Andy Cohen’s parents on their involvement in the LGBT community: 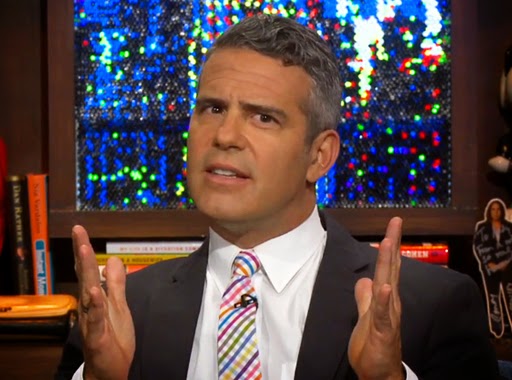 • Texas state Sen. Donna Campbell looks to pass a constitutional “license to discriminate” against the gays

• A federal judge has ruled Michigan cannot ban benefits for same-sex couples, even if they aren’t allowed to marry

• Sting’s new Broadway musical, The Last Ship, opened to mixed reviews from the critics, so now the music legend may join the cast of the show to save the sinking “ship” 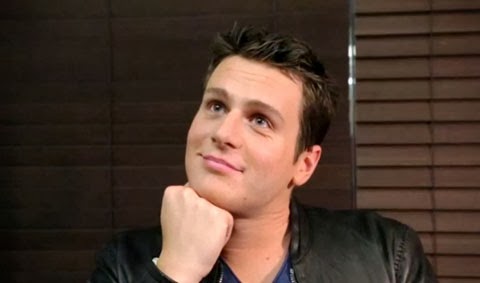 I hadn’t seen this series of YouTube videos – “Green Room Reflections” by celebrities before their appearances on Andy Cohen’s “Watch What Happens LIVE” on Bravo.

I think this is funny. The ADD aspect of Groff’s thoughts made me laugh.

“Do they give Oprah poppers?”

“I was told there would be melon.” 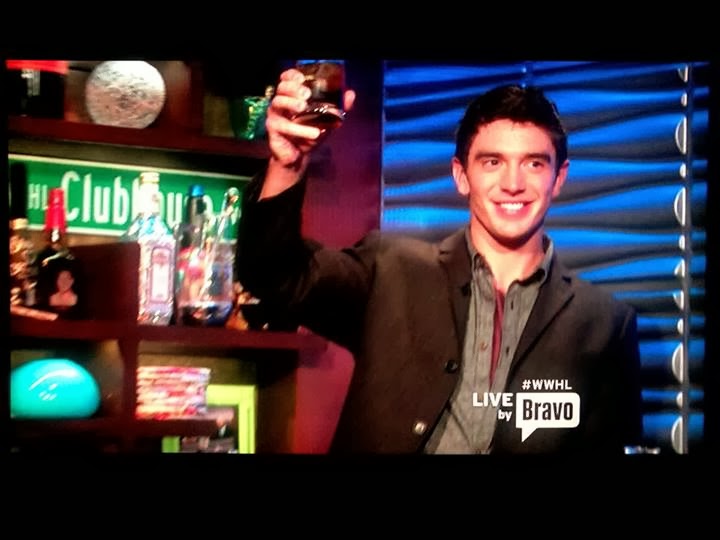 Steve “All-American Boy” Grand was the guest bartender on tonight’s “Watch What Happens Live” with Andy Cohen on Bravo.  Other guests were Nick Carter from Backstreet Boys and the fab Suzanne Somers.

Andy chatted with Steve a bit during the online “after-show.” Hit the video at the 2:30 mark. 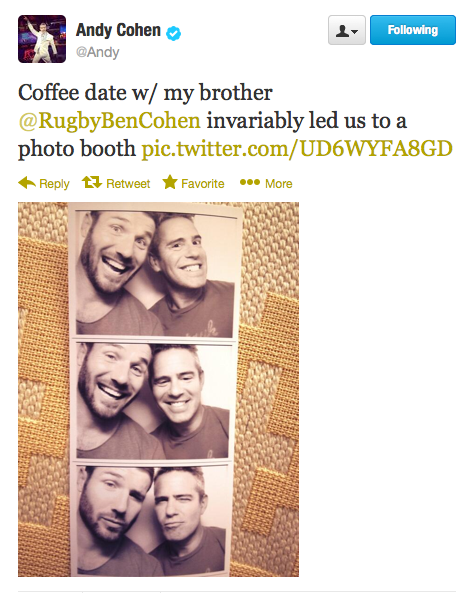 Andy Cohen tweeted these pics of him with his “brother” rugby superstar and LGBT ally Ben Cohen (who is currently appearing on Britain’s Strictly Come Dancing. 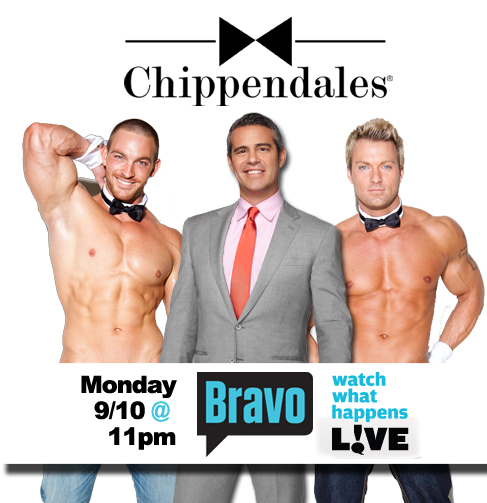 The Chippendales on Bravo’s “Watch What Happens Live” tonight!
Quick question: where does it look like Andy Cohen’s hands are in this pic?

From “Watch What Happens Live!” Andy Cohen presents clips of Meryl Streep’s fans losing their minds as she won her 3rd Academy Award earlier this year. Then, he introduces Meryl to her “biggest” fan, comedian Billy Eichner.

I love how funny people are when they meet their idols. Just precious…