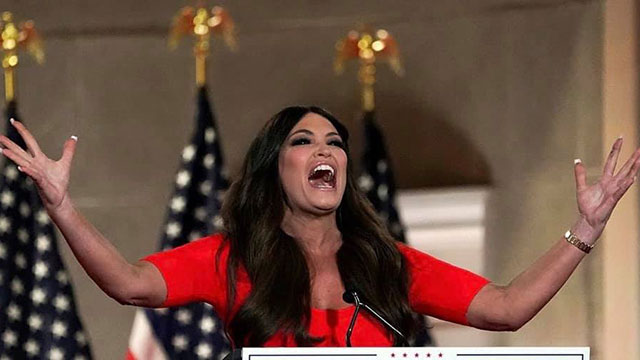 According to The New Yorker, Kimberly Guilfoyle, girlfriend to Donald Trump Jr., didn’t leave Fox News Channel in July 2018 under what you might call “good circumstances.”

In fact, the New Yorker is reporting tonight that a former assistant to Guilfoyle sent company executives “a 42-page draft complaint that accused Guilfoyle of repeated sexual harassment, and demanded monetary relief.”

The woman was hired in 2015, just out of college, to work as an assistant for Guilfoyle and another former Fox host, Eric Bolling.

According to a dozen well-informed sources familiar with her complaints, the assistant alleged that Guilfoyle, her direct supervisor, subjected her frequently to degrading, abusive, and sexually inappropriate behavior; among other things, she said that she was frequently required to work at Guilfoyle’s New York apartment while the Fox host displayed herself naked, and was shown photographs of the genitalia of men with whom Guilfoyle had had sexual relations.

The draft complaint also alleged that Guilfoyle spoke incessantly and luridly about her sex life, and on one occasion demanded a massage of her bare thighs; other times, she said, Guilfoyle told her to submit to a Fox employee’s demands for sexual favors, encouraged her to sleep with wealthy and powerful men, asked her to critique her naked body, demanded that she share a room with her on business trips, required her to sleep over at her apartment, and exposed herself to her, making her feel deeply uncomfortable.

Apparently, the accusations are tied into the departure of Guilfoyle’s former co-host at Fox News, Eric Bolling, who left the cable news channel due to allegations of sexual misconduct against him.

Multiple sources tell the New Yorker  the female assistant agreed to a $4 million settlement. Guilfoyle denied the accusations through her lawyer.

The rumors that Guilfoyle was forced out of her position at Fox News years before her contract ended were first reported by HuffPost in 2018.