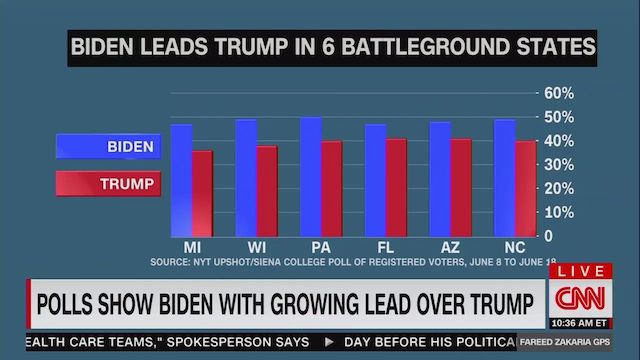 • Wisconsin, where Trump also won by less than 1% nearly four years ago, indicates Biden holds an 11 point lead as well (49-38)

• Arizona, traditionally a Republican enclave where Trump won by 4 points during the last election, indicates Biden ahead of Trump by 7 points (48-41)

Note: while the break-down of Democrats/Republicans/Independents polled was close in each swing state, there were more Republicans surveyed in Florida and Wisconsin. So, any claims of ‘weighting’ the polls in favor of Biden wouldn’t hold water.

Scoring a win in any three of the six states listed above, however, would be enough to put him over the 270 point threshold to win the White House.

But as I’ve written many times, national polls don’t really tell the tale of an election that’s predicated on the Electoral College.

Keep watching the swing state polling. A margin of plus/minus two or three points is close to a draw, but 6+ shows a clear advantage.