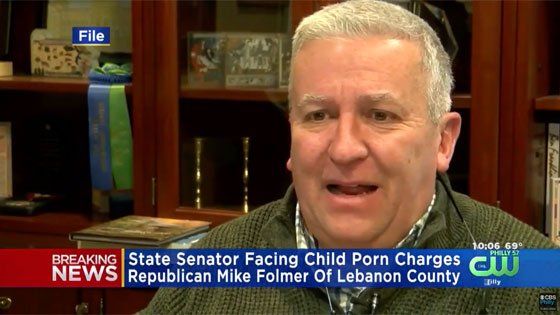 UPDATE: Mike Folmer has resigned from the Pennsylvania state Senate as a result of his child pornography charges.

The Washington Post is reporting conservative Pennsylvania state Sen. Mike Folmer has been charged with possession of child pornography.

The charges against Folmer include sexual abuse of children, possession of child pornography and criminal use of a communication facility.

The married grandfather of seven was caught as the result of a tip that popular blogging site Tumblr found that a user had uploaded an image of child pornography using its application, officials said.

They said the tip eventually led investigators to Folmer’s home in Lebanon, Pa., where they executed a search warrant and found child pornography images on his cellphone.

Folmer told the police that he received the images via his Tumblr account and that he was experiencing some ‘personal problems.’

It will come as no surprise that Folmer has often voted against LGBTQ protections or rights during his time in office because, you know, Jesus.