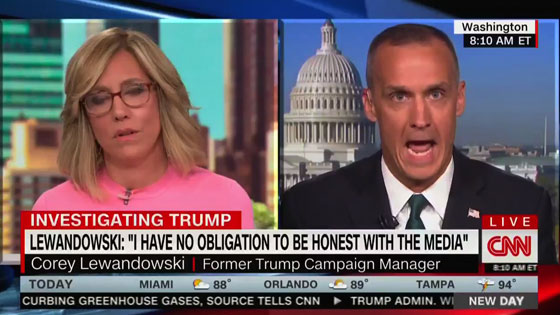 Hours after telling the House Judiciary Committee he has “no obligation to be honest with the media because they are just as dishonest as everybody else,” former campaign manager Corey Lewandowski sat down for a series of interviews with multiple news outlets.

On Wednesday morning, hours after the former Trump campaign manager’s chaotic and hyper-partisan testimony before the House Judiciary Committee ended with him admitting, under sharp questioning from committee Democrats’ counsel, to not playing it straight with the media regarding his involvement in President Donald Trump’s efforts to curtail the special counsel Robert Mueller’s investigation into Trump and Russia, both Fox & Friends and CNN booked Lewandowski for interviews.

Lewandowski’s interview on Fox & Friends — a show that regularly legitimizes the Trump administration’s talking points — was predictably chummy. But Lewandowski’s appearance on CNN, a network where he once worked as a paid contributor, produced the jarring image of him being interviewed over a chyron that seemingly refuted the rationale for booking him in the first place.

Predictably, Lewandowski’s interview on CNN devolved into a pro wrestling-style confrontation in which he deflected from questions about the veracity of his congressional testimony by raising questions about Trump critics who, as he once did, work as paid contributors for the network, such as former acting FBI director Andrew McCabe.

CNN's interview with Corey Lewandowski was, predictably, a mess. Here he is steamrolling Alisyn Camerota as she tries to ask him questions. pic.twitter.com/ctBFyUxECk

In which @BarryBerke tears Corey Lewandowski a new one pic.twitter.com/cwLf3NEI2E