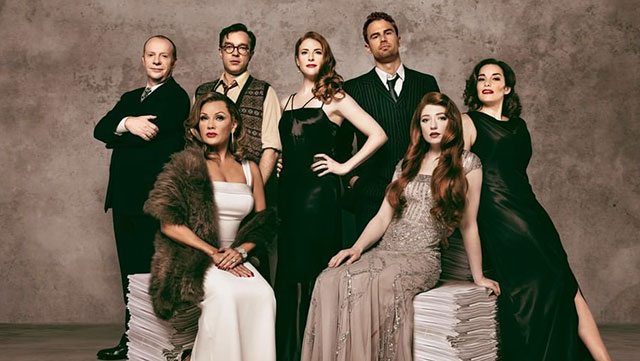 • West End Theater: The Donmar Warehouse’s Olivier Award-winning production of the Broadway musical City of Angels (starring my college bestie Vanessa Williams above) hits the boards on the West End for its first preview tonight. Word in theater circles is the show is stylish, smart, and stunning.

• Greenville Journal: A county in South Carolina was about to repeal a 1996 anti-LGBTQ resolution when religious dissenters, citing “traditional family values,” overwhelmed the County Council meeting just before the vote causing two council members to change their votes.

• The Hill: Vice President Pence, who is heading up the Trump administration’s response to the coronavirus threat told reporters today the United States does not currently have enough tests to meet the expected demand.

• Washington Blade: Chris Johnson is one of my favorite LGBTQ reporters and he’s penned an excellent assessment of the historic candidacy of Mayor Pete Buttigieg: “He made a mark on American politics — and not just because he broke barriers as a gay presidential candidate.”

• Washington Post: Now that Mike Bloomberg has exited the race for the White House, he has announced he plans to form an independent expenditure campaign that will absorb hundreds of his presidential campaign staffers in six swing states (Wisconsin, Michigan, Pennsylvania, Arizona, Florida, North Carolina) to work to elect the Democratic nominee this fall.

• Out Music: Maia, who records under the moniker mxmtoon, released her exuberant single and music video, “fever dream,” where she dances with her past and future self.

“We wanted to work with the themes of the single to make a video that exemplifies the nostalgia the lyrics evoke but also the courage to move forward,” shares the out bisexual artist.

With a blissfully nostalgic lilt, mxmtoon’s vocals are soothing and sure. The sentimental, upbeat melody is a refreshing escape from the clutter of today’s current news cycle.

Her 2018 debut EP plum blossom – recorded in her parent’s guest bedroom – has garnered more than 100 million streams on Spotify. You can follow her on Instagram here.