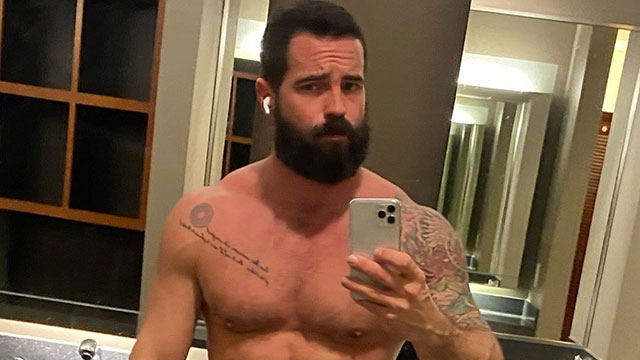 • InstaHunks: Woofy Joe Blizzard (above) thinks he looks ‘thick’ in this pic??? If only I were so ‘thick.’ Follow Joe on Instagram here. #beardgoals

• New York Times: Stocks tumbled for a seventh consecutive day on Friday, with the S&P 500 index falling about 0.8 percent, bringing its loss for the week to more than 11 percent. It was the worst weekly decline for stocks since the 2008 financial crisis.

• Washington Post: California has a second case of community transmission of the coronavirus, a 65-year-old resident of Santa Clara County who has no known history of travel to countries hit hard by the outbreak, people familiar with the case said Friday. There is also no apparent connection between the new patient and anyone else with the disease caused by the covid-19 virus.

• KIT212: Kenneth rounds up the what’s what in local gay publications like Matt Spike on the cover of London’s QX Magazine (below).

• WDRB: Kentucky Gov. Andy Beshear defended a photograph of him posing with drag queens at a gay rights rally and accused a Republican lawmaker of using homophobic tactics by displaying the photo at a recent campaign rally while accusing Democrats of corrupting traditional values. Beshear, a Democrat, told reporters Thursday that he would pose for the photo again, saying he was practicing his faith to treat everyone with respect.

• ABC News: A 19-year-old was taking a video of herself with a gun when she allegedly shot her 10-year-old nephew in the abdomen by accident, according to Texas authorities. Caitlyn Smith, 19, has been arrested and charged with serious bodily injury to a child — a second-degree felony.

• New Music: Lady Gaga released “Stupid Love,” the first single off her highly anticipated sixth studio album. The single is accompanied by a music video that was shot entirely on an iPhone 11 Pro and directed by Daniel Askill.

The not-so-good news: the music video is kinda silly, the costumes look like something out of Mighty Morphin Power Rangers, and the choreography is just so-so.

The good news: Gaga is back in dance mode a la “Born This Way.” Her vocals are on point, the bop has serious bounce, and it’s all joy and love. This is one of those I’d rather listen to than watch 🙂