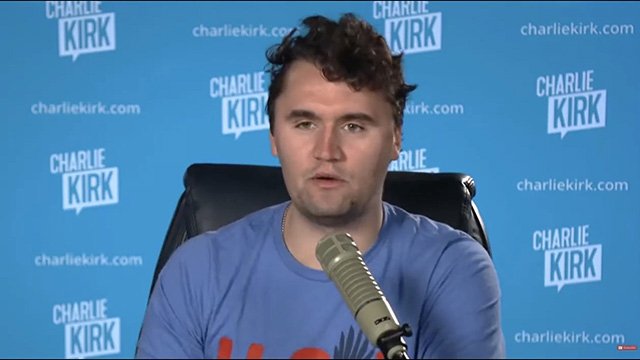 Far-right loon Charlie Kirk shared his ‘theory’ on his radio show this week that people who drive, versus taking public transit, end up being more conservative. #Wut?

Charlie Kirk: "The more you drive, the more conservative you are" pic.twitter.com/QSz73feNwz

“I have a theory about this, and I could just imagine Media Matters writing it up and that’s fine. I believe it’s not a perfect correlation and not a perfect connection, but I think it’s a 90% rule.

“The more you drive, the more conservative you are, just look at the truckers. I think that driving requires a form of responsibility. It requires a sense of awareness.

“What does it cost insurance gas prices? Whereas public transit, which can be nice in certain circumstances, I don’t think is actually ideal.

“I think that public transit makes you unaware of the costs or the investment of what is required to get you from point A to point B, where if you own a car in the suburbs or in the rural areas, you are intimately aware and invested in everything.

“How much does the car cost? How much does it fill cost? Fill up. Now, when you are thinking about costs, you generally end up being a conservative.

“A good rule for life is the more you care about costs, the less likely you are to be a Leftist. A Leftist is someone who does not consciously think about what is the cost.”

Of course, this is the same guy who claims tall buildings make people liberal.

p.s. Donald Trump lived on the 58th floor of Trump Tower in New York City, so…

Charlie Kirk asserts that tall buildings make people liberal: "The higher the building, the more liberal the voter. It just is. The closer to the ground you are, the more conservative you are" pic.twitter.com/ar5TlJYgWh