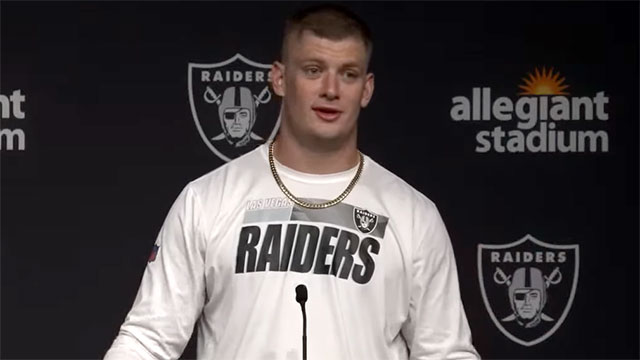 Carl Nassib, already making history as the first out gay man to play in a regular season NFL game, was a game-changer in the Las Vegas Raiders dramatic 33-27 win in overtime Monday night against the Baltimore Ravens.

Tied in overtime, it looked like the Raiders were going to suffer a loss after quarterback Derek Carr threw for an interception on 3rd and goal.

But five plays later, with the Ravens facing 3rd and 7 on their own 33 yard line, Nassib strip-sacked Ravens quarterback Lamar Jackson. A strip-sack occurs when a defensive player causes a fumble while tackling the opposing quarterback.

Raiders Darius Philon recovered the ball after the fumble, and two plays later Carr threw for a long, lofty touchdown connecting with Zay Jones for the win.

This defensive line… All heart.

Carl Nassib's forced fumble puts us back in business. Live on @espn pic.twitter.com/kG1gLqxMeT

“I’ve played in a lot of games, this being my sixth year,” Nassib said. “I try to make sure that I remember every single game. I won’t forget this one.”

Nassib, 28, publicly came out on June 21 in an Instagram post to his fans. His announcement made him the first active out player in the NFL.

This is his 6th season in the NFL and his second with the Raiders.