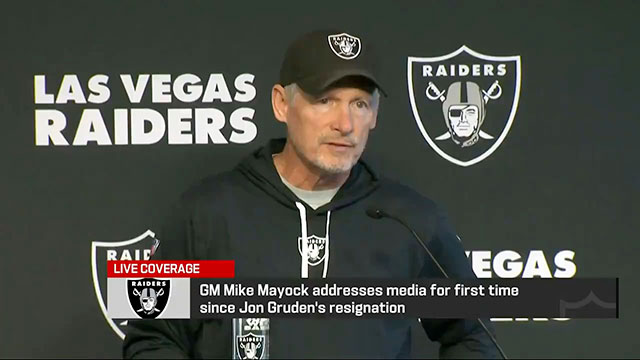 Las Vegas Raiders General Manager Mike Mayock addressed the press today regarding the resignation of former head coach Jon Gruden after a trove of emails over several years revealed he had a very casual relationship with the homophobic slur “faggot.”

Mayock told reporters defensive end Carl Nassib, the only out gay player in the NFL, requested a personal day today to process the events of the past few days. The request was granted.

Mayock added that he and Nassib have been meeting one on one and plan to meet again later today.

Here is the opening statement made by #Raiders GM Mike Mayock, the first by a member of the team's front office since Jon Gruden resigned. pic.twitter.com/3sxfzNxU05

As I reported yesterday, Gruden resigned from the Raiders after seven years of emails, from 2011-2018, revealed Gruden used homophobic, racist and misogynistic remarks in several emails to NFL officials while he was a lead analyst for ESPN.

When Raiders DE Carl Nassib came out as gay and people asked "who cares? Why does it matter?"

This is why it mattered. Because it turned out to be his own head coach sending homophobic emails less than three years ago.