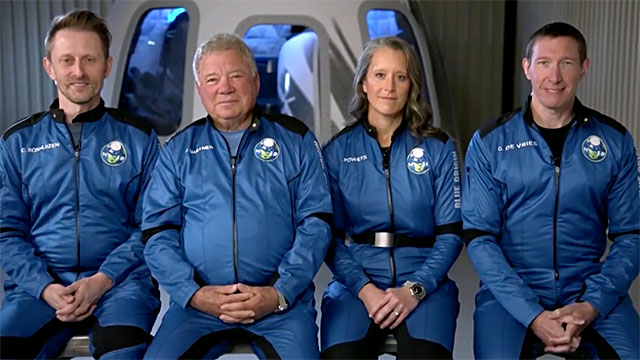 Original “Star Trek” star William Shatner launched into space for real today aboard a Blue Origin rocketship on a suborbital trip and landed in the Texas desert today becoming at age 90 the oldest person ever in space.

Shatner was one of four passengers to journey for roughly 10 minutes to the edge of space aboard the white fully autonomous 60-foot-tall (18.3 meters-tall) New Shepard spacecraft, which took off from Blue Origin’s launch site about 20 miles (32 km) outside the rural west Texas town of Van Horn.

The crew capsule returned to the Texas desert under parachutes, raising a cloud of dust. Shatner emerged gingerly from the capsule in the desert silence, appearing reflective as the others celebrated by cheering and popping champagne bottles. Bezos was on hand and embraced Shatner.

“What you have given me is the most profound experience I can imagine,” Shatner told Bezos as the two chatted for several minutes. “I am so filled with emotion about what just happened.”