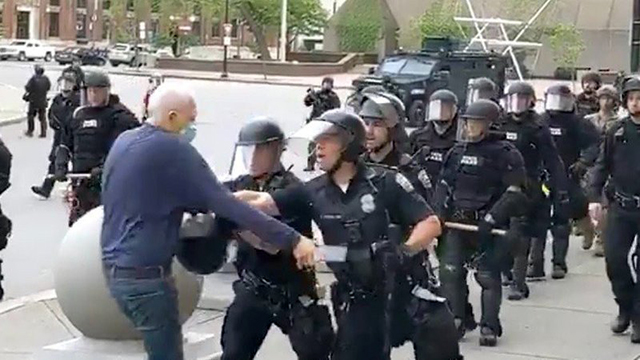 The entire Buffalo Police Department Emergency Response Team has resigned from the team. That’s a total of 57 officers.

We’re told this is a show of support for the officers who are suspended without pay after shoving 75-year-old Martin Gugino. They are still employed, but no longer on ERT. Mayor Byron Brown responded saying the city is aware of these resignations.

“As a longstanding member of the City of Buffalo Police Department, I know that our officers are fully committed to serving and protecting our community. While some officers have chosen to remove themselves from a voluntary assignment with the ERT, it is important to note that no officers have actually resigned from the police force.

“I want to reassure our citizens that they will be protected in any peaceful gatherings that ensue and that our department remains focused on the security of our community.”

For those who wonder why people protest about police brutality…

A man identified as Martin Gugino was shoved to the ground and eventually hospitalized as police in Buffalo, New York, last night as police were attempting to clear protesters in front of City Hall.

A 75-year-old protester was injured Thursday night after being pushed to the ground by police as officers clearing Niagara Square as the citywide curfew went into effect.

Following the incident, which drew swift national attention and mass condemnation after video of it was viewed millions of times, the Buffalo Police Department suspended two officers without pay and began an Internal Affairs investigation, according to a police official and a department spokesman.

As seen in the video, as police advance, Gugino approaches the officers with what appears to be a phone in his right hand and a helmet in his left. He appears to point to the baton of one of the officers as the word “Move” can be heard amid shouts in the background.

The officer Gugino pointed to then pushes Gugino with his right hand and Gugino falls backward to the ground, where his head hits the sidewalk. One officer appears to reach down to check on him, but another officer pulls him back and the first officer continues walking. Other officers walk by and do not immediately come to Gugino’s aid.

Initially, the Buffalo Police Department issued a statement that claimed Gugino “tripped and fell,” a description at direct odds with the video.

Gugino is reportedly in serious but stable condition at Erie County Medical Center.

At this writing, the video has been viewed over 65 million times.

Just about an hour ago, police officers shove man in Niagara Square to the ground (WARNING: Graphic). Video from: @MikeDesmondWBFO pic.twitter.com/JBKQLvzfET

He didn’t trip he was shoved by the police pic.twitter.com/AM34ltvnRz

This incident is wholly unjustified and utterly disgraceful.

I’ve spoken with Buffalo @MayorByronBrown and we agree that the officers involved should be immediately suspended pending a formal investigation.

Police Officers must enforce — NOT ABUSE — the law. https://t.co/EYIbTlXnPt

A BPD spokesperson released this update. Five people were arrested and another person was injured during a protest in Niagara Square tonight. @WKBW pic.twitter.com/UZoDsSRs4J

They added insult to injury by showing such depraved indifference while he’s on the ground. They just walked on without even providing aid.