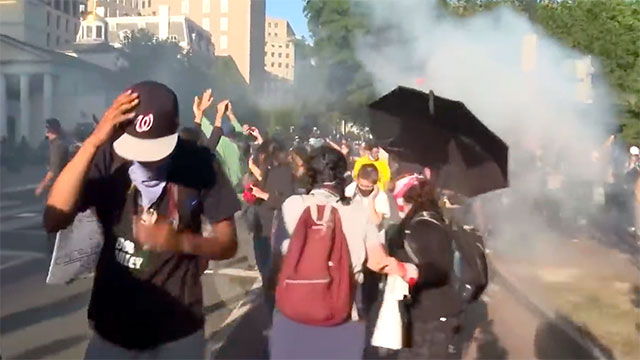 The U.S. Park Police on Friday attempted to parse its previous statement declaring it did not use tear gas on crowds near the White House Monday prior to Donald Trump’s photo opp in front of a nearby church.

A US Park Police spokesperson said in an interview it was a “mistake” to insist in a statement on Tuesday that it didn’t use tear gas the day before in Lafayette Square to disperse a crowd ahead of President Trump’s photo op, explicitly noting that pepper balls shot by officials irritate the eyes and cause tears.

“The point is we admitted to using what we used,” Sgt. Eduardo Delgado said. “I think the term ‘tear gas’ doesn’t even matter anymore. It was a mistake on our part for using ‘tear gas’ because we just assumed people would think CS or CN,” two common forms of tear gas.

“I’m not going to say that pepper balls don’t irritate you,” Delgado said, noting they contain capsicum, an irritant derived from pepper plants. “I’m not saying it’s not a tear gas, but I’m just saying we use a pepper ball that shoots a powder.”

The original statement from acting Chief Gregory Monahan said that no tear gas was used by any federal force present, but that the Park Police itself “employed smoke canisters and pepper balls.”

Pepper spray is a naturally derived chemical irritant that causes many effects similar to that of common types of tear gas, including temporary blindness and a burning sensation in the nose.

At the end of the day, it becomes an issue of semantics. The authorities did fire irritating pepper spray and smoke grenades at peaceful protesters so that the Donald could have his awkward photo opp.

Let me know if you think these non-violent protesters were fired upon in the video below.