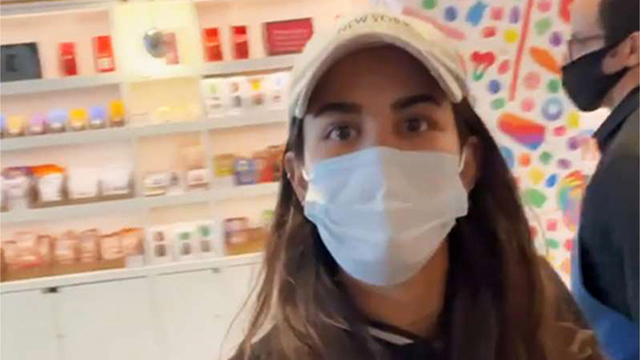 On Saturday, Grammy Award-winning jazz musician Keyon Harrold and his 14-year-old son were staying at the Arlo Soho in New York City when a woman (who had misplaced her cellphone) accused Harrold’s son of stealing her phone.

Harrold shared a one-minute video on his Instagram account showing the woman becoming unhinged demanding that the hotel manager take the boy’s phone and give it to her.

In the video, the hotel manager actually sides with the white woman and asked the teen to show his phone to the woman.

As Harrold and his son were walking away from the ugly encounter, the woman tackled the 14-year-old in an effort to reach into his pockets.

Minutes after the attack shown in the video an Uber driver dropped the woman’s phone off at the hotel. No, she did not apologize.

Now, I ask you – imagine if a Black man tackled a white woman’s child over a cell phone?

The lady in this video assaulted my 14-year-old son and me as we came down from our room in the @arlohotels Arlo Soho to get breakfast. This person quote on quote “lost” her iPhone, and apparently, my son magically acquired it, which merely ridiculous.

This incident went on for five more minutes, me protecting my son from this lunatic. She scratched me; she tackled and grabbed him. He is a child!!!

Now watch it again. This lady is not even a guest at the hotel. She checked out of the hotel on the 23rd of December; today is the 26th.

Now watch as the manager advocates for the lady who is not even a hotel guest, insisting and attempting to use his managerial authority to force my son to show his phone to this random lady. He actually empowered her!!! He didn’t even consider the fact we were actually the guests!

Now think about the trauma that my son now has to carry, only coming downstairs to have box day brunch with his dad.

Then… her phone was magically returned by an Uber driver a few minutes after this incident. No apology from her after this traumatic situation to my son, not me. No apologies from the establishment. This shit happens so often. It needs to stop!!!

The hotel posted an ‘apology’ on its Instagram account a day later, clearly in damage control mode.

Harrold told the New York Times on Sunday that it was clear his son had been racially profiled. “I wonder what would happen if it were different – if it were a Black woman and there was a white 14-year-old,” he said.

In Mr. Harrold’s video, the hotel manager can be seen identifying himself and asking the son to produce a cellphone, in an apparent attempt to verify the woman’s claim. But the manager had no reason to believe the woman, Mr. Harrold said.

“They assumed he was guilty,” Mr. Harrold said. “The management didn’t even question her as to why she would even think he had the phone.”

The woman has not been publicly identified. Both the police and the hotel declined to share a name, and Mr. Harrold said he did not know who she was or how to contact her.

A spokesperson for the Manhattan DA told NBC News that the office is “thoroughly investigating this incident.”

I’d love to hear why – other than her apparent racism – she believed the teen had her phone.