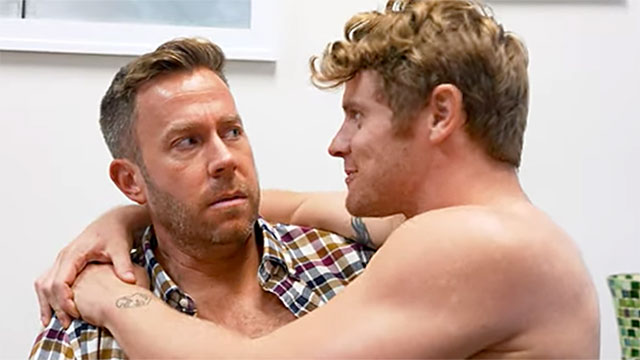 In the latest installment of Artie O’Daly’s ‘Bad Boy’ web series, Scott (played by O’Daly) takes a trip to his writing agent’s office to discuss the plot for a proposed movie.

Jim (Drew Canan) tags along since, due to forces out of Scott’s control, the upcoming film is supposed to be about Jim’s life (“One of the first real people to have a movie made about their lives. Like Forrest Gump…”).

But with the agent fired, and a temp worker moved up to full-fledged decision-maker, Scott pitches some new ideas like the next prison story blockbuster (or Mamma Mia 3…if need be) instead of Jim’s life story but the agent, Jamila (Julia Pace Mitchell), is smitten with the bad boy’s charms.

But Jim’s nemesis BJ (Braden Davis) uncloaks from his invisibility (don’t ask) and pitches his own story for movie stardom.

Everyone wants to pitch a story! But who’ll catch?

Ultimately, things come down to an epic lap dance-off between the two ‘bad boys’ (as happens so often in life) where the winner takes all.

As we’ve come to expect in O’Daly’s wild and wacky world, the dialogue takes some fast and furious turns leaving ‘Daddy Scott’ with some mental whiplash.

You can check out my previous coverage of the ‘Bad Boy’ web series here.