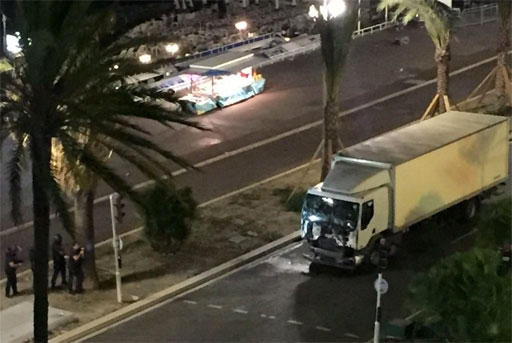 What we know so far about the deadly attack in Nice, France, last night:

• While Bouhlel was known to intelligence services, he was not on any watch list.

• Police were eventually able to shoot Bouhlel dead to stop the horrific massacre.

• At this writing there are at least 84 dead, and hundreds injured.

• The truck Bouhlel drove was loaded with arms and grenades. Some were reported to be fake upon inspection.

• No terrorist group has come forward yet to claim responsibility for the incident.

• The investigation has been handed over to counter-terrorism experts.

On behalf of the American people, I condemn in the strongest terms what appears to be a horrific terrorist attack in Nice, France, which killed and wounded dozens of innocent civilians. Our thoughts and prayers are with the families and other loved ones of those killed, and we wish a full recovery for the many wounded.

I have directed my team to be in touch with French officials, and we have offered any assistance that they may need to investigate this attack and bring those responsible to justice. We stand in solidarity and partnership with France, our oldest ally, as they respond to and recover from this attack.

On this Bastille Day, we are reminded of the extraordinary resilience and democratic values that have made France an inspiration to the entire world, and we know that the character of the French Republic will endure long after this devastating and tragic loss of life.

“Every American stands in strong solidarity with the people of France” —Hillary on the attack in Nice pic.twitter.com/BBGgHucSE0

Another horrific attack, this time in Nice, France. Many dead and injured. When will we learn? It is only getting worse.