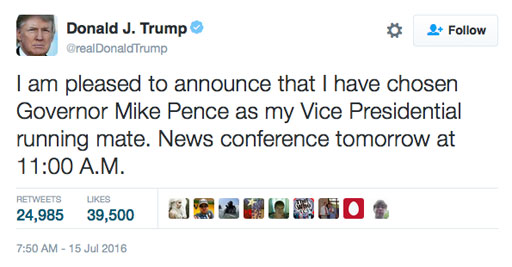 It goes without saying that Pence has a terrible history with the LGBT community.

He pushed for a constitutional ban on same-sex marriage that the even Republican-led Indiana state legislature felt went too far in limiting LGBT rights.

And of course, there’s last year’s media storm when Pence signed into law a “religious freedom” measure that would have allowed companies to assert their “sincerely held religious beliefs” if sued for denying service to LGBT customers.

The Indiana legislature eventually amended the law to clarify that it doesn’t allow discrimination against LGBTQ people. But for LGBT folks, we remember who pushed for the disastrous legislation.

Pence also voted against the Employment Non-Discrimination Act, against the repeal of “Don’t Ask, Don’t Tell,” and no on hate crime legislation.

On other political fronts Pence has been equally frightening:

• Supports a total ban on abortion.

Side note: When I read “Trump/Pence,” I hear “tuppence.”

For someone who’s very aware of branding, imaging and language, it’s surprising no one explained to the Donald that that refers to a “trivial amount.”

It looks like Hillary Clinton was prepared for the announcement as she shared this little video introduction to Gov. Mike Pence.