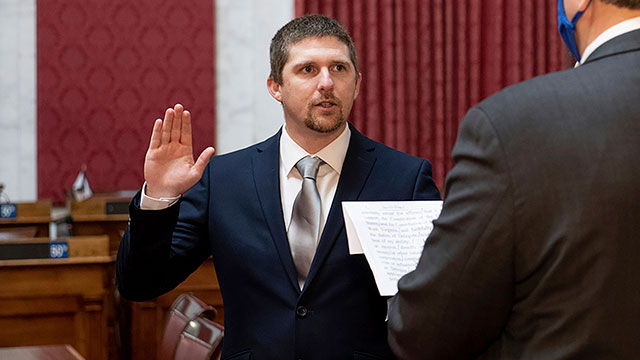 A West Virginia lawmaker resigns as he faces federal charges for taking part in the invasion of the U.S. Capitol this week.

Derrick Evans, who was recently sworn in as a member of West Virginia’s House of Delegates, has resigned in a short statement.

“I hereby resign as a member of the House of Delegates, effective immediately,” Evans wrote in a one-page letter.

Derrick Evans, 35, of West Virginia, was charged with one count of knowingly entering or remaining in any restricted building or grounds without lawful authority; and one count of violent entry and disorderly conduct on Capitol Grounds. Evans was taken into custody Friday.

It is alleged that on Jan. 6, 2021, Evans, a recently elected member of the West Virginia House of Delegates, streamed live to his Facebook page a video of himself joining and encouraging a crowd unlawfully entering the U.S. Capitol. In the video, Evans is allegedly seen crossing the threshold of the doorway into the U.S. Capitol and shouting, “We’re in, we’re in! Derrick Evans is in the Capitol!”

Initially, Evans denied the allegations that he was part of the violent mob that broke into the Capitol building, but his own video footage shows differently. As late as Friday, Evans told the press that would not resign.

The House released a lengthier statement from Evans that expressed regret for his actions.

“I take full responsibility for my actions, and deeply regret any hurt, pain or embarrassment I may have caused my family, friends, constituents and fellow West Virginians.

“I hope this action I take today can remove any cloud of distraction from the state Legislature, so my colleagues can get to work in earnest building a brighter future for our state. And more importantly, I hope it helps to begin the healing process, so we can all move forward and come together as ‘One Nation, Under God.’”

Five people died during the riot including a Capitol Police officer.

Think about all the time and effort he put into running for office, all the people who worked on his behalf and donated money, all so he could go act like a fool and piss it all away.