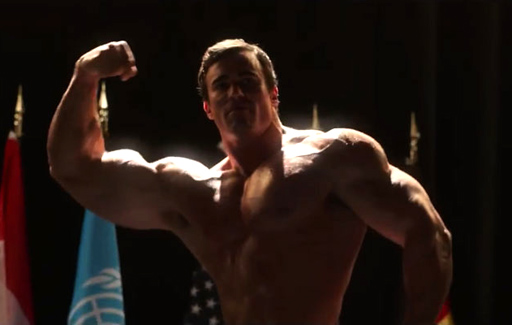 Check out the official trailer for Bigger, the new biopic that chronicles the lives of Joe and Ben Weider, who rose from poverty to become the indisputable leaders in the bodybuilding industry for over 50 years.

Weider and his brother Ben (played by Aneurin Barnard) are widely credited with creating the modern bodybuilding/fitness movement.

From their fitness publishing empire that included Muscle & Fitness, Muscle Power and Shape magazines to Weider Nutrition founded in 1936, to founding the International Federation of Bodybuilders in 1946, the Weiders were THE leading force in fitness in decades.

In 1967, the IFBB launched its first competition, the world-renowned Mr. Olympia.

Weider also discovered and mentored the young Arnold Schwarzenegger for years in the early 1970s.

It wasn’t all muscle-bound glory, though. In the 1970s and 1980s, the brothers found themselves the target of several investigations regarding claims of false advertising about their products.

Writer/director Joe Gallo (Bad Boys, Midnight Run) described the film to Deadline as “beyond inspirational, and will resonate with not only the massive crowd of those who have found the balance of body and mind as essential for a healthy life but also the throngs of people that were inspired by Joe and his Mr. Olympia events.”

View this post on Instagram
Such a great night with my family and friends to celebrate all the hard work everyone put into this film! By far the most challenging thing I’ve taken on in my time working as an actor, and I couldn’t be more grateful for the effort and support from everyone on this set. Can’t wait for everyone (who wants to haha) to see this film. It’s a great story about a man who wasn’t afraid to be different, to pursue his passion, and who showed persistence in the face of adversity. Also about the amazing woman standing next to him who showed him what love truly was. And a special thank you to @juleshough for doing such a beautiful job portraying Betty, and always being present in every moment of telling the story of these people. Thank you Jules for making this movie what it is. Wouldn’t have worked without you. And to my brother @aneurin.b for playing my brother on screen, and also becoming one off set for the weeks we spent filming. I miss you Taff, you’re one of the good ones. Thanks everyone! #BiggerTheMovie October 12th! And per usual, to my friends at @johnvarvatos for making sure I didn’t show up in gym gear (which may have been appropriate for this one, who knows).
A post shared by Tyler Hoechlin (@tylerhoechlin) on Sep 18, 2018 at 5:53pm PDT

View this post on Instagram
Red carpet for the @biggerthemovie premier with @tylerhoechlin #Bigger movie comes out October 12th
A post shared by 🇦🇺CALUM VON MOGER️️️ 🛴🦖 (@calumvonmoger) on Sep 17, 2018 at 3:29pm PDT