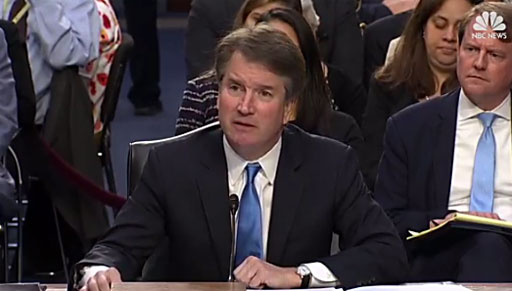 In the ongoing scandal regarding sexual misconduct allegations leveled against U.S. Supreme Court nominee Judge Brett Kavanaugh by college professor Christine Blasey Ford when they were high school students, the Senate Judiciary Committee has invited both Kavanaugh and Ford to testify next Monday.

Kavanaugh has agreed to appear, but in a letter from her lawyer yesterday, Ford requested a pause so the FBI can do a proper investigation of the issue.

Speaking through lawyers, Christine Blasey Ford said she would cooperate with the Senate Judiciary Committee and left open the possibility of testifying later about her allegations against Judge Brett M. Kavanaugh. But echoing Senate Democrats, she said an investigation should be “the first step” before she is put “on national television to relive this traumatic and harrowing incident.”

Republicans signaled Tuesday night that they would not negotiate an alternative date and would go ahead with the hearing without her or declare it unnecessary if she refuses to appear, then possibly move to a vote. They have repeatedly stressed that Monday would be Dr. Blasey’s opportunity to testify, either privately or publicly, and that they planned to move forward with the confirmation process afterward.

In a letter to Ford and her attorney, Senate Judiciary Committee Chairman Chuck Grassley (R-IA) repeated his invitation to testify this coming Monday.

He also stated, “It is not the FBI’s role to investigate a matter such as this.”

Kavanaugh has expressly denied the allegations.

His longtime friend, Mark Judge, who Ford alleges was in the room at the time of the alleged assault, has said he does not remember the incident and will not testify under oath.

Judge’s inclusion in the story makes for an interesting detail by Ford. Many experts say if she were lying, why would she include the presence of a third person in the room who might corroborate Kavanaugh’s denials?

Unless she’s telling the truth…?

A new Reuters/Ipsos poll shows only 31% of those polled support Kavanaugh’s nomination while 36% oppose (up six points from last week).