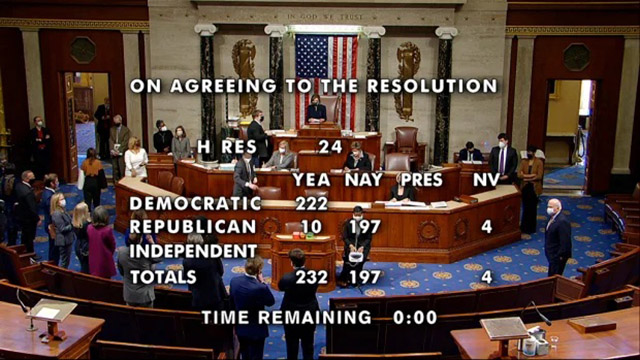 Donald Trump has become the first president in the history of the U.S. to face impeachment charges twice.

In a bipartisan vote of 232 to 197, the House of Representatives approved a single article of impeachment against Trump charging him with “inciting violence against the government of the United States” in regard to last week’s insurrection at the Capitol.

The House on Wednesday impeached President Trump for inciting a violent insurrection against the United States government, as 10 members of the president’s party joined Democrats to charge him with high crimes and misdemeanors for an unprecedented second time.

Reconvening under the threat of continued violence and the protection of thousands of National Guard troops, the House was determined to hold Mr. Trump to account just one week before he was to leave office.

At issue was his role in encouraging a mob that attacked the Capitol one week ago while Congress met to affirm President-elect Joseph R. Biden Jr.’s victory, forcing lawmakers to flee for their lives in a deadly rampage.

Ten House Republicans joined with Democrats in passing the measure.

The Senate will now face holding impeachment proceedings once the House transmits the article of impeachment.

Senate Majority Leader Mitch McConnell has reportedly been ‘pleased’ by the impeachment development but says he won’t bring the Senate back into session before its scheduled session on January 19.

So in a little over two years, Donald Trump lost the House, the Senate, the presidency, and got impeached twice.

-Lost the popular vote twice
-Been impeached twice
-Lost the House in 2018
-Lost the Senate in 2021
-Lost reelection by 7m votes, 306-232 electoral votes
-Banned from Twitter and Facebook for inciting a riot at the US Capitol