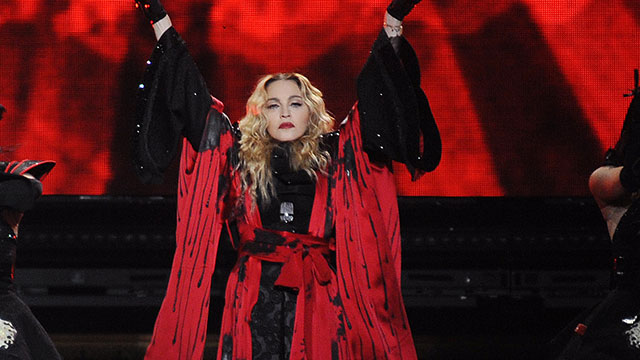 Republican Rep. Ken Buck of Colorado raised eyebrows today when he attempted to blame international pop-star Madonna and comedian Kathy Griffin for the attack on the U.S. Capitol last week.

The statement came during hours of debate today on whether to approve an article of impeachment against Donald Trump for inciting a violent mob that invaded the U.S. Capitol building as Congress was certifying the Electoral College votes.

Buck told his colleagues that Americans were ‘frustrated’ by a laundry list of things including the Special Counsel investigation into the Trump campaign’s links to Russia, efforts by Congress to impeach Trump (the first time), and more.

“They were frustrated when members of this House spoke over and over about impeaching the President days into his administration,” Buck said. “And then the socialists in Hollywood joined their allies in Congress.”

The socialists in Hollywood…here we go…

“Robert De Niro said that he wanted to punch the president in the face,” continued the Colorado lawmaker. “Madonna thought about blowing up the White House. Kathy Lee Griffin held up a likeness of the President’s beheaded head, and nothing was heard and nothing was said by my colleagues at that point in time.”

That’s not accurate, of course.

Griffin received considerable pushback from members of both political parties at the time of her ‘severed head’ stunt.

According to Newsweek she was investigated by the Secret Service and the FBI, placed on the no-fly list for months and lost her New Year’s Eve CNN gig with Anderson Cooper. She also found it difficult to book stand-up comedy appearances for a long period of time.

And while it’s true that Madonna did allude to ‘blowing up the White House,’ Buck takes her comment totally out of context.

Her statement occurred at the women’s march on Washington in January 2017 opposing the inauguration of Donald Trump.

Here’s the remark in full:

“Yes, I’m angry. Yes, I am outraged. Yes, I have thought an awful lot of blowing up the White House, but I know that this won’t change anything. We cannot fall into despair. As the poet W.H. Auden once wrote on the eve of World War II: ‘We must love one another or die.’ I choose love. Are you with me? Say this with me: We choose love…”

Madge clarified her comments on Instagram the very next day writing, “I am not a violent person, I do not promote violence and it’s important people hear and understand my speech in it’s entirety rather than one phrase taken wildly out of context.”

Madonna and Kathy Griffin were soon trending on Twitter for this very surprising reason.

During impeachment debate one of my republican colleagues just ranted about Robert De Niro, Madonna, and Kathy Griffin saying mean things about trump. He did this to defend trump’s insurrection. I wish I were making that up. This is the republican party.

My only take away…
“Kathy Griffin AND MADONNA”
🥰🔥👑 https://t.co/XdN6icGMik

me finding out Madonna was name dropped at the impeachment hearings pic.twitter.com/sTQE8z0fj4

This MF just blamed the coup on Madonna

😲
I must have blinked and missed it. When was Robert DeNiro, Madonna and Kathy Griffen president?

Was that when Hunter Biden was a candidate?

Oh no celebrities are mean to meeee. Y’all stormed a government building in hopes to hang someone. So. Yeah. That’s so dumb.

Ken Buck says it was “Hollywood socialists,” Robert deNiro. Madonna. And Ken Buck, who is an idiot, doesn’t know the difference between Kathie Lee Gifford and @kathygriffin.