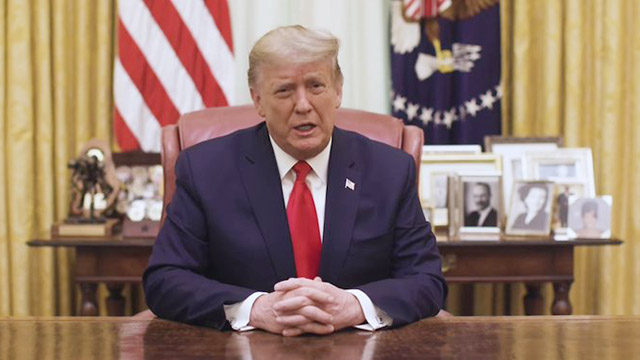 Donald Trump released a video message today admonishing “violence and vandalism” in regard to the invasion of the U.S. Capitol building last week.

The video came shortly after the House approved an article of impeachment against Trump by a vote of 232-197 making him the first president ever to be impeached twice.

This comes across as a preemptive legal defense against impeachment to me. Trust and believe, he did not write a word of this.

“I want to be very clear,” he continued. “I unequivocally condemn the violence that we saw last week. Violence and vandalism have absolutely no place in our country and no place in our movement. Making America great again has always been about defending the rule of law” and supporting law enforcement officials.

As a candidate in 2016, Mr. Trump once encouraged rally attendees to physically attack protesters. But in the video on Wednesday, he said that “mob violence goes against everything I believe in and everything our movement stands for. No true supporter of mine could ever endorse political violence.”

There was no mention of the people who died in the melee last week including one Capitol Police officer who was reportedly bludgeoned with a fire extinguisher.

Looking ahead to the inauguration of President-elect Joe Biden, Trump added, “There must be no violence, no lawbreaking and no vandalism of any kind.”

Trump: “No true supporters of mine could ever endorse political violence.”

TELEPROMPTER: “I did not endorse the violence.”

REALITY: “I sat & watched the violence play out on TV and I did nothing to stop it. Instead, I ignored all calls to intervene as I sat there, clapping my little doll-hands in giddy delight, because the violence was what I wanted.”

More lies in Trump video. Says “no true supporters of mine could ever endorse political violence.” (These were his supporters of his at rally. He told them to come. He said he was with them as they marched to Capitol. Also he has stoked violence before calling press “enemy,” etc)

He said they were very special, he loved them…he watched it unfold on TV, all for his ego.
He chose to do nothing and allow terror to reign in hopes of stopping the count process.

Trump, in his new video statement, said “no true supporter of mine could ever disrespect law enforcement.” Here’s video evidence of a Capitol security guard being beaten with a Trump flag pic.twitter.com/AwNQkgQ1dD

to the rioters: “I love you. You are very special”