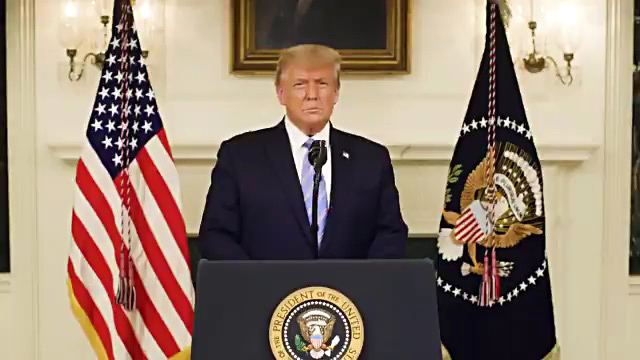 Amid calls for a second impeachment proceeding and his Cabinet to invoke the 25th Amendment, Donald Trump has issued his fifth response to the invasion of the U.S. Capitol yesterday and asked his cultists to stand down.

Trump released a two-minute video today calling for his cultists to stand down and accept the results of the 2020 election.

In a speech that could not ever have been written by the Donald, this represents two things in my mind:

1. This is the closest thing Trump will ever come to conceding the election.

2. He is clearly scared by the wide-ranging calls for his removal from office either via the 25th Amendment or a second impeachment. All of the language used here is carefully scripted with the idea of a future legal proceeding in mind.

Yesterday, Trump told his followers he “loved them” and that they “are special.”

p.s. Trump lies in the video saying he “immediately” ordered the National Guard to go into the fray. He did not.

This is Trump’s “please don’t impeach me (again)” speech! Obviously he didn’t write it and doesn’t believe anything that he just said, but at least he said this election is OVER and that he will be leaving office. Thanks to whoever wrote the speech!

You should have said this yesterday instead of telling the mob of rioters carrying Confederate and Trump flags that you love them.

Pence deployed the National Guard — not you. You refused. You wanted this.. You planned this.

Trump in new WH produced video calls for “healing” and offers to help with transition to next admin, adding “tempers must be cooled.” (Trump had weeks to send this message but instead incited a riot Wednesday. He doesn’t take responsibility or apologize for his action in video)