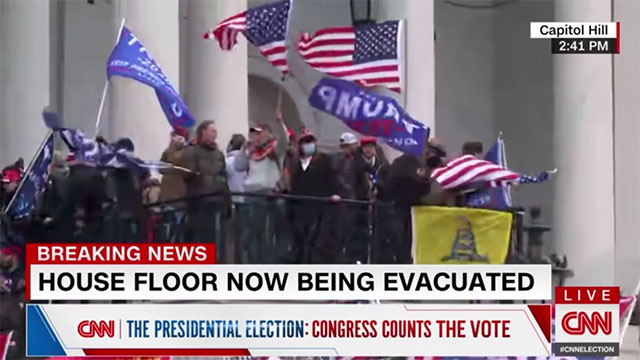 Several news outlets are reporting that Vice President Mike Pence has been evacuated from the Senate Chamber as Trump cultists have breached security barricades outside the Capitol.

According to reports, there is an armed standoff at the door to the House floor.

The Capitol building was placed on lockdown, with senators and members of the House locked inside their chambers, as Congress began debating President-elect Joe Biden’s victory. President Trump addressed supporters near the White House before protesters marched to Capitol Hill.

Chaos engulfed the Capitol on Wednesday as a faction of Republicans sought to overturn President-elect Joseph R. Biden Jr.’s victory in Congress and a group of protesters loyal to President Trump tried to storm the building, demanding to be heard.

Around 2:15 p.m., the proceedings ground to a halt as security rushed Vice President Mike Pence out of the Senate chamber and the Capitol building was placed on lockdown, with senators and members of the House locked inside their chambers.

The extraordinary day in Washington laid bare deep divisions both between the two parties and within Republican ranks, the ceremonial counting of electoral votes that unfolds every four years in Congress was transformed into an explosive spectacle, with President Trump stoking the unrest.

BREAKING: Trump supporters have breached the Capitol building, tearing down 4 layers of security fencing and are attempting to occupy the building — fighting federal police who are overrun

This is the craziest thing I’ve ever seen in my life. Thousands, police can’t stop them pic.twitter.com/VVdTUwV5YN

THIS is how much Trump supporters love law enforcement

Protestors have entered the Capitol. pic.twitter.com/dzaDGn5MoC

trumper thugs are wilding out at the Capitol.

Expect a loud chorus of crickets from GOP hypocrites who constantly point fingers of blame at Antifa and BLM.pic.twitter.com/pB21nQY1RE

It took 159 years, but a mob marching behind a confederate flag has stormed the US Capitol. They are doing so on @realDonaldTrump’s express orders. pic.twitter.com/Q9MnbT0emZ

The party of law and order is fighting with police in an attempt to break into the Capitol and harm lawmakers. pic.twitter.com/4Vbi44DErN

MAGA protesters are spraying pepper spray back at police on Capitol Hill pic.twitter.com/9TeqRefjZq