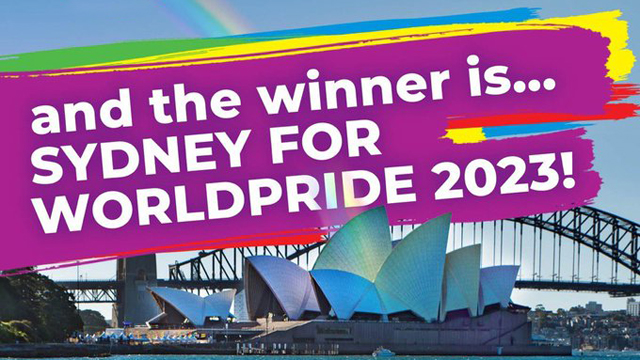 WorldPride will head ‘down under’ in 2023 as Sydney, Australia, has won its bid to host the biennial LGBTQ+ celebration.

Choosing between Sydney, Montreal, and Houston, members of the worldwide InterPride network of Pride organizations gave Sydney 60% of the vote.

Members of the worldwide InterPride network of Pride organisations voted between Sydney, Montreal and Houston as the host city for WorldPride 2023. We won with 60% of the vote.

❤️ WE THANK YOU ALL SO MUCH!!! pic.twitter.com/kEViSaqMt0

This is the moment Sydney found out we won the vote for #WorldPride2023 host city! 🏳️‍🌈🌏 pic.twitter.com/XNiRUdgBem

Congratulations @SydneyMardiGras on your successful bid to bring #WorldPride to Australia.

We can’t wait to invite the world to Sydney in 2023! 🌈 pic.twitter.com/tSIdLIRUsu

Me this morning when my colleagues asked me how I feel about Sydney winning the World Pride 2023 bid 🏳️‍🌈 pic.twitter.com/xgLf088mjb

The celebration, comprised of cultural activities, parades, and festivals, will take place at the same time as the 2023 Sydney Gay and Lesbian Mardi Gras. With its winning bid, Sydney becomes the first city in the southern hemisphere to host the event.

In 2021, WorldPride will be hosted by two cities in two countries for the first time. The events will be held from August 12-22 in Copenhagen, the capital of Denmark and the Swedish neighboring city Malmö in the Řresund Region. The two cities are a short 15-minute commute from each other.

This past summer, WorldPride was held in New York City to coincide with the 50th anniversary of the Stonewall uprising, long considered the birth of the gay rights movement.

#WorldPrideNYC Thank you to all of our incredible volunteers this year who made WorldPride 2019 | Stonewall 50, “Millions Of Moments” to remember. pic.twitter.com/GUs1Hr0JME

Back in 2012, during my first visit to Sydney, I made this travelogue video about the gorgeous city: 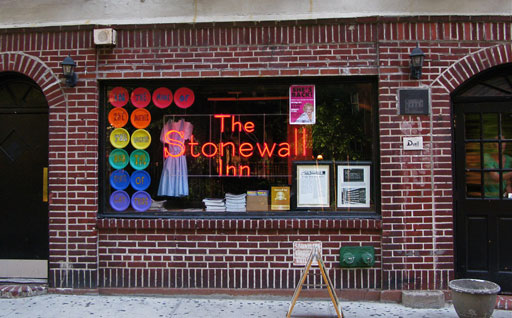 Is it ever too late to apologize?

The producers of WorldPride 2019 | Stonewall 50 have publicly asked for the New York City Police Department to officially apologize for the violent police raid at the Stonewall Inn on June 28, 1969.

The brutal raids in the early morning hours of June 28, 1969, led to what has become known as the Stonewall Uprising as drag queens, gays, lesbians, and transgender people fought back leading to more protests against police brutality. The event is credited for giving birth to the modern-day LGBTQ movement.

The Executive Board of Heritage Pride, Inc., the organization responsible for producing over 25 events in New York City celebrating the 50th anniversary of the Stonewall Uprising, issued a statement which read, in part:

“Last night, we voted unanimously to demand that the NYPD formally apologize to the LGBTQIA+ community for the violent police raid that triggered the Stonewall Uprising. We offer our stage at the Stonewall 50 Commemoration Rally on Friday, June 28, 2019 for Police Commissioner James P. O’Neill to do so on behalf of the Department.”

The statement acknowledged “significant strides” made by the NYPD under Commissioner O’Neill, but asks the Department to “take responsibility for the decades of police violence committed against” the LGBTQ community in New York City.

The executive board added that the “small, albeit meaningful step” of an apology would demonstrate “what is possible for the future of our community and our movement.”

“Commissioner O’Neill and the NYPD, the eyes of the world are on our city, and we call upon you to show what real change can look like,” the board wrote in closing. “The platform is yours on June 28th.”

“The NYPD in the past has apologized for other incidents that have occurred, and so I think the NYPD apologizing on this would be a very, very good thing, and it’s something they should do,” explained Johnson.

“I would love for it happen this month, and I will bring it up to the police commissioner,” Johnson continued. “Because I think it would be an important step toward further healing and reconciliation and recognizing what happened in that crucial moment, and not just in American history, but New York history in June of 1969.”

When reached for comment regarding an apology to the LGBTQ community, Commissioner O’Neill told 1010WINS, “The NYPD of today is much different than the department of 50 years ago, and a number of important changes have been implemented that bring the police and all the communities we serve closer together.”

With an estimated three million people expected to travel from around the world to New York City for the WorldPride events, O’Neill said, “We are looking forward to the many events surrounding this year’s milestone anniversary, and to working with all attendees to ensure that everyone not only is safe, but feels safe, too.”

This isn’t the first time the idea of an apology from the NYPD has been floated.

Back in June 2017, at an event hosted by the NYC Bar Association, an attendee in the audience asked O’Neill if he would “apologize for the discrimination and violence” that occurred at the historic raid.

But this morning, Eric Bottcher, chief of staff for Speaker Johnson, tweeted that O’Neill formally apologized to the LGBTQ community at the first ever NYPD LGBTQ Pride Month Community Safety Briefing this morning.

“I’m certainly not going to be an expert of what happened at Stonewall,” O’Neill told the press. “The actions taken by the NYPD were wrong … and for that I apologize.”

This has never happened: NYPD Commissioner @NYPDONeill apologizes on behalf of the NYPD for the Stonewall raid. Thank you, Commissioner. #pride2019 #NYCPride #WorldPride2019 pic.twitter.com/0pHHGdjzQK

“I think it would be irresponsible to go through World Pride month and not to speak of the events at the Stonewall Inn in June of 1969,” Mr. O’Neill said.

“What happened should not have happened. The actions taken by the N.Y.P.D. were wrong, plain and simple,” he added.

“The actions and the laws were discriminatory and oppressive, and for that, I apologize.” 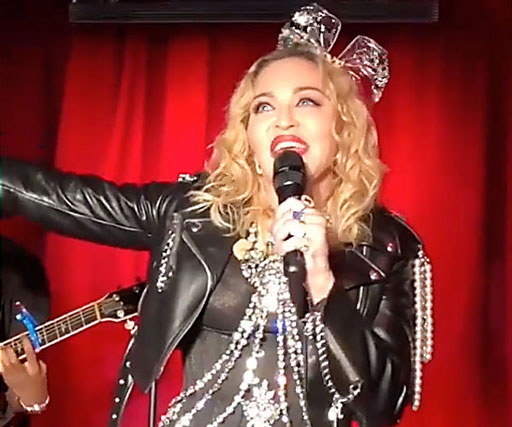 NYC Pride, organizers of WorldPride NYC 2019/Stonewall 50, announced today that Madonna will make an appearance, and is expected to perform a few songs, at Pride Island on Sunday, June 30, 2019.

Madonna was the first to announce the news through a video aired during the Monday June 3, 2019 broadcast of NBC’s The Today Show.

“I hear you,” said Madonna in the video, while draped in one of her Madame X Rainbow Flags, “I will be on Pride Island, where I was born.”

Madonna has partnered with The Trevor Project and for the entire month of Pride, all of Madonna’s proceeds from the exclusive Madame X Pride collection of a limited-edition Pride Rainbow Vinyl, flag and digital download will be donated to the organization.

More than 4.5 million people are expected to visit New York City during WorldPride, events of which started on Saturday, June 1 and runs throughout LGBTQIA+ Pride Month across the 5 boroughs of New York City.

For more information about WorldPride NYC 2019 | Stonewall 50 and its official roster of events, visit http://worldpride.org/. 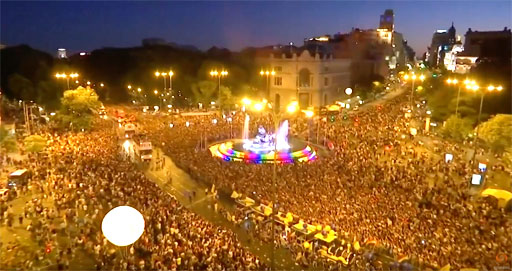 This year’s event coincides with the 40th anniversary of Spain’s first LGBT parade.

A convoy of more than 50 floats snaked through central Madrid amid a carnival atmosphere as part of celebrations marking the WorldPride parade, a celebration of lesbian, gay, bisexual and transgender rights that has been held in several cities across the world since its inception in 2000.

Politicians from across the political spectrum walked ahead of the parade, passing through the Spanish capital which was decked out in rainbow flags to mark the occasion.

“Madrid wants you to remember, and to never forget, that whoever you love, Madrid loves you,” Madrid’s Mayor Manuela Carmena wrote on Twitter on Saturday.

The next WorldPride will be hosted by New York City in 2019 which just happens to be the 50th anniversary of Stonewall. 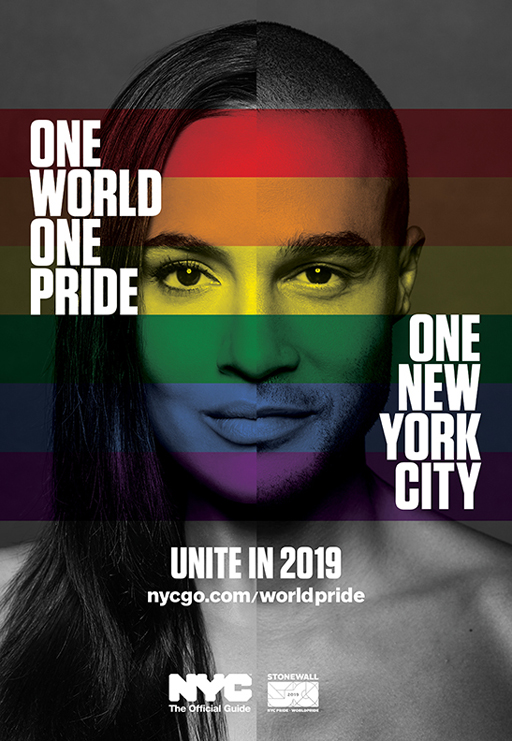 Set to take place in New York City in June 2019, the global celebration of Pride will coincide with the historic 50th anniversary of the Stonewall Riots—the birthplace of the modern gay rights movement—making it a year to underscore New York City’s progress and resilience as a global LGBTQ capital.

The announcement was made as New York City’s 2017 Pride celebrations are currently underway this week. A new invitational campaign, titled “One World, One Pride, One New York City – Unite in 2019” launched yesterday in New York City, with additional promotion and activations taking place in Madrid during the upcoming WorldPride celebrations there June 23–July 2.

“As a city with such a rich history of fighting inequality and an unwavering dedication to social progress, we are thrilled to host WorldPride 2019,” said Mayor Bill de Blasio. “I can think of no better time to celebrate the LGBTQ community than on the 50th anniversary of Stonewall—a seminal moment in the struggle for inclusion and human rights that has reverberated across the country for decades.”

News comes out of this weekend’s InterPride conference in Las Vegas that WorldPride 2019 will be held in New York City in conjunction with the 50th anniversary of Stonewall.

NYC Pride, producers of NYC’s iconic LGBT Pride events, announced today that New York City has been selected to host WorldPride 2019. WorldPride 2019 will be held in conjunction with Stonewall 50, the official commemoration of the 1969 Stonewall Uprising. 2019 marks the first time that WorldPride, a global LGBT Pride event, will be celebrated in the United States. Previous host cities have included Rome, Jerusalem, London, and Toronto, while Madrid will host the next WorldPride in 2017. NYC Pride’s bid was accepted during the Annual General Meeting of InterPride in Las Vegas this weekend. InterPride is the international organization of LGBT Pride organizers.

“The Stonewall Uprising is considered the most significant event that ignited the modern LGBT rights movement, so it makes perfect sense to bring WorldPride to the birthplace of Pride in 2019,” said David Schneider, NYC Pride’s Stonewall 50 Director, “We are so grateful that our fellow Pride organizers from across the globe have chosen New York City for this momentous occasion.” The theme of Stonewall 50/WorldPride 2019 is “Millions of Moments of Pride,” and features an expanded two-month series of events and programs alongside NYC Pride’s historic March, Rally, PrideFest, and legendary dances for men and women. While NYC Pride draws millions to NYC each June, Stonewall 50/WorldPride 2019 is anticipated to be one of the largest LGBT events ever to occur.

Melissa Etheridge, Deborah Cox and Steve Grand were just a few of the entertainers who helped kick off WorldPride in Toronto last night.