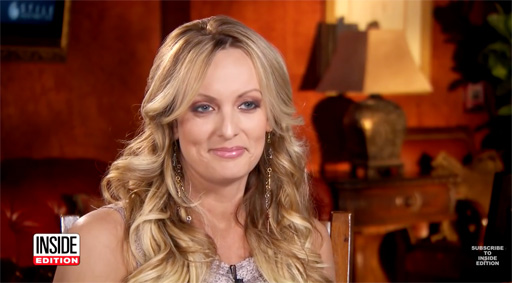 The Guardian received an advance copy and shares this anecdote about the Trumpster’s now infamous Lake Tahoe tryst with Daniels.

Trump’s bodyguard invites Daniels to dinner, which turns out to be an invitation to Trump’s penthouse, she writes, in a description of alleged events that Daniels has disclosed previously but which in the book are rendered with new and lurid detail. She describes Trump’s penis as “smaller than average” but “not freakishly small.”

“He knows he has an unusual penis,” Daniels writes. “It has a huge mushroom head. Like a toadstool…

“I lay there, annoyed that I was getting fucked by a guy with Yeti pubes and a dick like the mushroom character in Mario Kart…”

“It may have been the least impressive sex I’d ever had, but clearly, he didn’t share that opinion.”

Daniels also writes that when she would see the reality show host on television during the years since the encounter, the memory of her sexual encounter with Trump did not grow fonder.

In fact, she describes her internal monologue as, “‘I had sex with that,’ I’d say to myself. Eech.”

“Mario Kart” and “Toad” instantly began trending on Twitter after The Guardian’s piece hit the internet.

Trump has denied the sexual encounter ever occurred although his former personal lawyer, Michael Cohen, paid Daniels $130,000 in ‘hush money’ just weeks before the 2016 presidential election.

Cohen has since pleaded guilty to multiple felony charges.

all I want on this earth is for sarah huckabee sanders to deny it. to come out, glare menacingly at all the nice reporters in the crowd, and say “no the president’s penis does not look like the little mushroom from mario kart”

When Trump’s inauguration crowd was embarrassingly small, he made his team crop photos to make it seem bigger.

Please if there is a god have mercy on our souls and stop that from happening with this Mario Kart/Stormy Daniels thing.