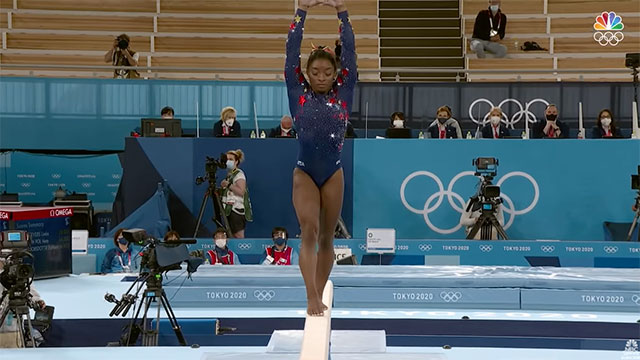 Overcoming mental health issues (and some serious bouts of the ‘twisties’), superstar American gymnast Simone Biles returned to Olympic competition today for the women’s final in balance beam and scored a bronze medal.

“I didn’t expect a medal today,” said Biles. “I just wanted to go out there and do this for me, and that’s exactly what I did.”

Biles now ties the record for the most Olympic medals won by a U.S. gymnast, Team USA tweeted shortly after she bagged the bronze. She scored 14.000.

The star finished behind Guan Chenchen and Tang Xijing, both of China. Guan took the gold with a score of 14.633, ahead of Tang 14.233.

Speaking Tuesday, Biles said she had been evaluated by medical professionals daily. She also had two sessions with a sports psychologist while in Tokyo, which she said had helped ease her mind.

“Then just focusing on beam since I don’t twist and all that really helped,” she said.

In being able to work through those mental blocks and come back to win the bronze, Biles told reporters she will view this medal as “definitely sweeter.”

“I’ll cherish this a lot more. I would like to dedicate it to all Team USA for helping me and reaching out and supporting me. It’s just meant the world.”

Simone Biles made a triumphant return to competition by earning a bronze medal in the balance beam final at the Tokyo Olympics. pic.twitter.com/qBqlLdaegx

"I didn't expect a medal today, I just wanted to go out there for me and that's what I did."