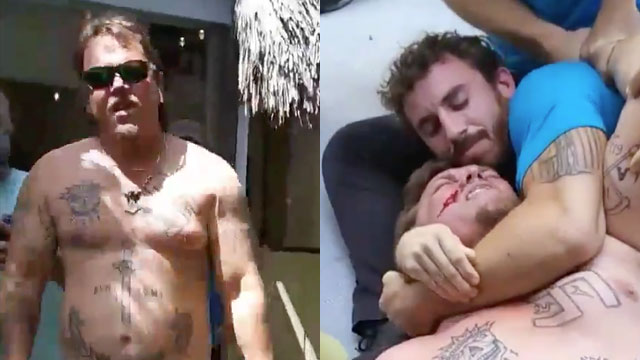 A self-proclaimed white supremacist went on a loud, curse-laden rant at a restaurant in Sarasota County, Florida, and then slapped and punched a female employee.

The man was identified as Nicholas Arnold Schock, 36. He was booked into the Sarasota County jail on a count each of battery, and disturbing the peace. It is unclear if he has an attorney at this time. Records viewed by Law&Crime show the Wachula-resident was arrested Friday in the city of Nokomis. He was held on a $620 bond.

In the video, the man identified as Schock demands “Call Donald Trump.” He goes on like that.

“I’m a white supremacist,” he said. “The Aryan nation will rule the world!” he yells at the camera. “People covered in tattoos are going to be my closest relatives, I promise you.”

“Hey, we’ve got children in here,” a bystander said.

“I don’t give a fuck,” the suspect said. “Call Donald Trump, please.”

A bystander in a light cyan shirt tries to lead him off.

He ambled off, and a woman stepped in front of him with her arms spread. The woman apparently said something about there being kids there, but the suspect then slapped her in the face. Bystanders rushed the man and took him down. One of them cinched in a chokehold.