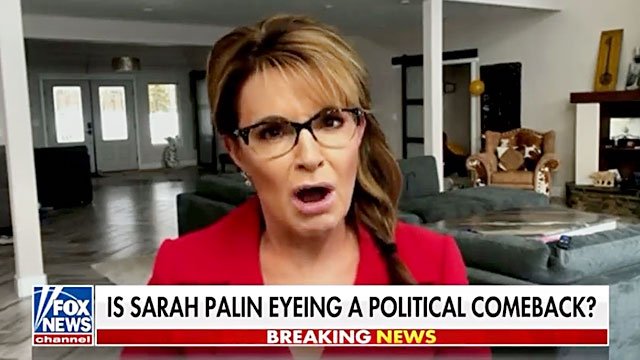 Sarah Palin, the former half-term governor of Alaska, says she’s considering running for Congress because she wants to fight the “namby pamby wussy pussy stuff” that she says is causing a “mess” in the country now.

During an appearance on Fox News, Palin told Sean Hannity she sees herself as another Donald Trump, someone with “cajones” who has “nothing to lose.”

“I’m going to throw my hat in the ring because we need people that have cajones,” Palin said. “We need people, like Donald Trump, who have nothing to lose, like me.”

“We got nothing to lose and no more of this vanilla milquetoast namby-pamby wussy pussy stuff that’s been going on. That’s why our country is in the mess that we’re in.”

Palin: … I’m going to throw my hat in the ring because we need people that have cajones. We need people like Donald Trump who has nothing to lose like me. We got nothing to lose and no more of this vanilla milquetoast namby-pamby wussy pussy stuff… pic.twitter.com/49vCbLgkkJ

Palin is eyeing Alaska’s lone House seat that was held by Rep. Don Young (R-AK) for 49 years before passing away earlier this month at the age of 88.

Palin speaks as though she believes she might be appointed to the House somehow. But a special election to fill the seat is set for this summer, with a primary slated for June 11 and a special general election on August 16, the same date as Alaska’s regularly scheduled primaries.

You’ll recall Sarah Palin found her way to the national spotlight when she was picked by 2008 Republican presidential candidate, Sen. John McCain (R-AZ), to be his running mate.

Running on an anti-LGBTQ platform that called for banning same-sex marriage on state and federal levels and pronouncing being gay as “a choice,” Palin would defend her stance with the oh-so-tired “I have a gay friend.”

She famously floundered when asked by Katie Couric what her go-to news sources were and then couldn’t name one.