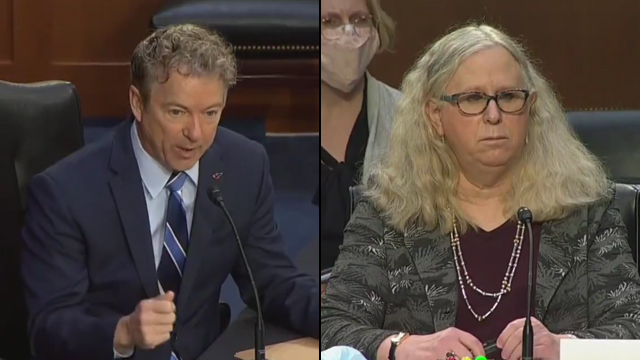 During a joint hearing of the Senate Health, Education, Labor and Pensions (HELP) Committee held today to confirm Surgeon General Nominee Dr. Vivek Murphy and Dr. Levine, most questions were focused on the issue of the ongoing coronavirus pandemic.

But Sen. Rand Paul (R-KY) – who is also a self-certified ophthalmologist – came prepared with an unhinged transphobic rant which seemed to catch everyone by surprise including Dr. Levine, who is transgender.

Levine, currently the Secretary of Health for Pennsylvania, is President Biden’s nominee for assistant secretary of health. The position oversees the department’s key public health offices, several presidential and secretarial advisory committees, 10 regional health offices across the nation, the Office of the Surgeon General, and the U.S. Public Health Service Commissioned Corps.

In addition to being the Keystone State’s Health Secretary, Levine has amassed a lengthy resume in the field of health care which includes being a professor of pediatrics and psychiatry at the Penn State College of Medicine. It’s worth noting that Levine has been confirmed three times by the Republican-controlled state Senate of Pennsylvania.

He continued stating that such medical procedures are “nearly always carried out on minors and is a violation of the rights of children.”

The senator seemed to be conflating bottom surgery with castration and female circumcision, which is performed on children in some countries around the world.

Minors being treated for gender dysphoria almost never have bottom surgery. Instead, they are given puberty blockers which allows trans youth time to consider, weigh and explore who they are before teen hormones can permanently change their bodies.

Paul attacked the use of such puberty blockers citing the American College of Pediatricians. That might have sounded like a legit reference except the organization has been designated as a hate group by the Southern Poverty Law Center for promoting anti-LGBTQ bias.

The name is intended to be misleading as it is often confused with the American Pediatric Association, the actual recognized organization of pediatric physicians. That group advises parents of trans kids to “listen, respect and support their child’s self-expressed identity.”

“Transgender medicine is a very complex, and nuanced field,” Levine said. “And if confirmed to the as assistant Secretary of Health, I would certainly be pleased to come to your office and talk with you and your staff about the standards of care and the complexity of this field.”

For the record, Dr. Levine never endorsed the idea of government overriding the involvement of parents being involved in their children’s health care issues.

Sen. Patty Murray, chair of the Senate Committee on Health, Education, Labor & Pensions, clapped back at Paul asking him to treat nominees before the committee with respect.

“It is really critical to me that our nominees be treated with respect and that our questions focus on their qualifications and the work ahead of us, rather than ideological and harmful misrepresentations like those who heard from Sen. Paul earlier,” Murray said.

Today’s hearing marked the first time an openly transgender person has sat for Senate confirmation for a presidential appointment.

Beginning with the words “genital mutilation,” Sen. Rand Paul launched into an unhinged #transphobic rant during the confirmation hearing of Dr. Rachel Levine (who is trans) pic.twitter.com/IOvIVXmE66

And it’s a national embarrassment to do such at the confirmation hearing for Dr. Levine.

I sincerely hope the Senate confirms Dr. Rachel Levine based on her vast qualifications.

Rand Paul’s transphobic questioning of Dr. Rachel Levine this morning is why we need the #EqualityAct.