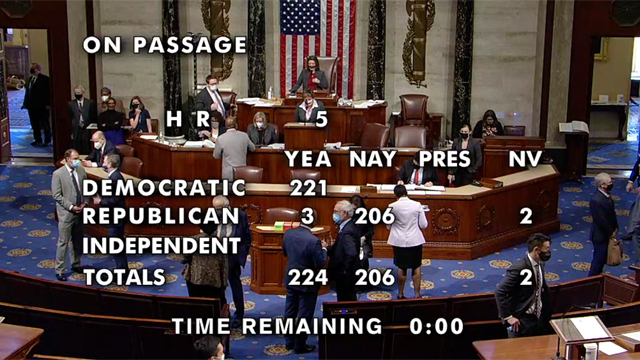 As expected, the Equality Act, which would amend current federal laws to outlaw discrimination against LGBTQ people, passed in the House of Representatives today.

With 3 Republicans voting with all Democrats, the vote was 224-206.

Conservatives argue the Equality Act would interfere with their right to discriminate against LGBTQ people based on ‘religious liberty.’

Half of LGBTQ people in the U.S. live in the 29 states that lack comprehensive, statewide protections. As a result, discrimination is still commonplace – and legal.

Currently, a person can be denied housing because of their sexual orientation or gender identity in 27 states; denied access to education in 31 states; and the right to serve on a jury in 41 states.

Former Senate Majority Leader Mitch McConnell never allowed a vote on the bill in the Senate.

“The House passage of The Equality Act is a victory for all Americans and for our country’s core values of equal treatment under law. This landmark civil rights law secures those protections for every LGBTQ person, to live without fear of discrimination. An overwhelming majority of Americans already support laws protecting LGBTQ people from discrimination, including Americans of all faiths. We are now calling on Senate leaders to come together to finish the work for what is right and just for all Americans. Any Senator against The Equality Act is not only complicit with LGBTQ discrimination, but grossly out of touch with the bill’s widespread, bipartisan public support. It is time to move together to ensure LGBTQ people have the chance to belong, to participate and to succeed in all areas of American life.”

“We applaud the House vote on the Equality Act, and but we now look to the Senate and begin in earnest what should be a bipartisan effort to protect LGBTQ people. This is what we know: LGBTQ people in 29 states are not protected by anti-discrimination laws. This patchwork of equality is indefensible – the Equality Act must be passed by the Senate so all LGBTQ Americans will be protected from discrimination. It could not be more clear: current civil rights laws leave LGBTQ people, women, people of color and people of faith vulnerable to discrimination. The Equality Act can right this wrong and take the country one step closer to living its promise of ‘liberty and justice for all’ and truly mean it.”

“We applaud the House for supporting this bill once again, as it did in 2019, and urge the Senate to follow suit. As Black History Month concludes, we implore Senators to vote in favor of the Equality Act like their lives depend on it, as ours do.”

BREAKING: The #EqualityAct has passed the House of Representatives with bipartisan support. We are one step closer to ensuring that every person in America is treated equally under the law. pic.twitter.com/A94SFVfQkz

BREAKING: The House has voted 224-206 to pass the #EqualityAct, which would protect LGBTQ people in areas including in housing, education, public accommodations and access to credit. pic.twitter.com/89tiZEflzb

BREAKING: The U.S. House of Representatives has passed the Equality Act, which enshrines protections for LGBTQ Americans into federal law! We applaud the LGBTQ members of the House for their dedication to this fight, and we urge the Senate to pass this critical bill immediately. pic.twitter.com/jSQMNz29mk

Today, we are one step closer to a future where every LGBTQ person can live their lives free from the fear of discrimination. Proud to be an original co-sponsor of this legislation.🏳️‍🌈