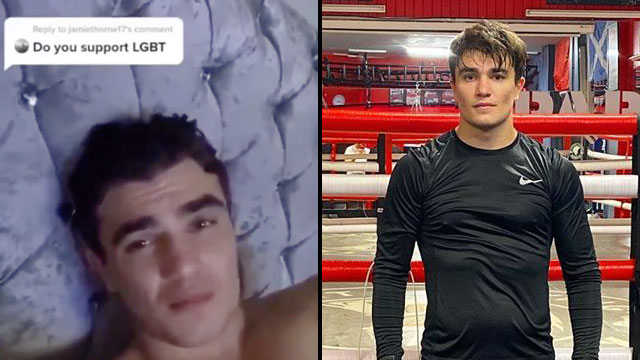 British pro boxer James Hawley was dropped by his promoter MTK Global after he went on a homophobic and transphobic rant on TikTok.

Hawley was responding to a question from a fan who asked, “Do you support LGBT?”

“I one thousand, one million percent do not agree with this stuff,” replied Hawley in his video response. “Listen, I can understand girls get with each other all the time at parties and all things like that. I don’t care, not a problem. I’d want them to get with each other in front of me.”

“But boys, on the other hand, and transgenders, there’s something seriously wrong with you,” the 21-year-old boxer continued. “What in the earth makes you want to change your gender and get f**ked in the ass? What is up with you dirty c*nts? I feel sorry for your families.”

UK drag star Baga Chipz shared the video clip on Twitter calling Hawley out as “homophobic filth” and “an absolute piece of dirt.”

(Offensive video) Today’s Scum is no other than “pro boxer” and really hard man James Hawley. Homophobic Filth. What a hard man. Report the Low life. What an absolute piece of dirt. pic.twitter.com/W7hdWwbDE0

MTK Global got wind of the anti-LGBTQ rant and quickly dropped Hawley from their roster.

In a statement, MTK Global said:

“The management team have made the decision to terminate Mr. Hawley’s contract with MTK Global with immediate effect and will no longer be representing him in any format.”

Adding that the firm “prides itself on it’s community focus and ethos,” the statement went on to say, “MTK Global does not in any way condone or support the views that were shared in any way, nor will these comments ever be considered as acceptable from any of our fighters hence the decision that was made by management.”

The Daily Mail notes that, since his debut in December 2014, Hawley has a 6-0 record in the boxing ring.

Hawley confirmed he’d been dropped by MTK in a video posted to his Instagram Story saying he “understands” why the action was taken.

He also added that the night of his rant he’d “hit a brick wall and had enough” of being sent messages and “disturbing images” by a “few members of the gay community.”

“I lashed out and said a few things I didn’t mean,” Hawley continued.

Next comes the inevitable…

“I have some friends who are gay,” Hawley offered. “I also have a cousin who’s gay, so I never meant anything by it and I’m sorry for who I offended.”

But flipping the script, Hawley asks, “How would you like it if members from the gay public, on a day to day basis, was sending you inappropriate videos and messages – basically abusing you?”

He ended the ‘apology’ by saying he felt his dismissal from MTK was “unfair” and is hoping for a chance to share his “side of the story” and present “evidence” that shows his rant was an “attack out of anger, not over what I believe.”

Hawley goes on to say if men were sending unwanted sexually suggestive photos and messages to a woman “the situation would be completely different.”

@ChipShopBird hahaha his Instagram apology is bizarre. He apologises, then justifies his behaviour.. then he says he understands why he has been dropped by @MTKGlobal but says the decision was wrong! Guy needs a tutor and detention.. 🙄 go you though for calling him out! 👌🏽

“If this happened to a girl…massive action would be taken”. No it wouldn’t, most women have stories of harassment online and offline but we don’t all use it as an excuse for homophobia. He should just admit he’s a bigot and stop playing the victim.

This is what happens when you get punched in the head for a living. https://t.co/c0CtHuPlmS

The young athlete has also apparently been blocked on TikTok.

What do you think readers? Should Hawley have been sacked? Or does unwanted attention (and photos) from gay fans justify his rant?

Let me know in the comments below.