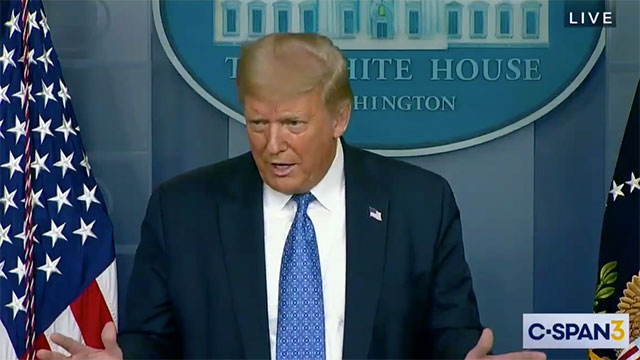 During a White House press briefing today, Donald Trump was flummoxed when CNN reporter Kaitlan Collins asked the Donald why he blamed President Obama in 2016 for violent crime in Chicago, but today Trump doesn’t take responsibility.

“Chicago is a disaster,” said Trump, diverting from the question. “The mayor is saying, don’t come in, the mayor is telling us not to come in.”

After Collins followed-up on the question, Trump again blamed his predecessor, “Because President Obama was invited in, and he did a poor job … he could have solved the problem.”

.@kaitlancollins: In 2016, you said it was Obama's fault crime was up in Chicago. So why was it Obama's fault then & not your fault now?

TRUMP: Chicago is a disaster

TRUMP: Because Obama did a poor job. He could've solved the problem. pic.twitter.com/5mAMgZO4QV

Team Trump is simultaneously trying to argue that Trump