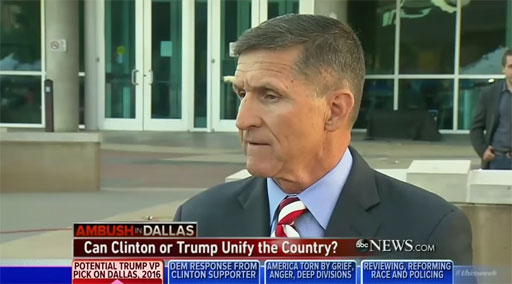 It’s been just a day since the rumor of registered Democrat, retired Lt. General Michael Flynn being vetted as Donald Trump’s running mate.

But ABC News’ “This Week” quickly booked an interview with the former Army vet. Oh, and he has a book to sell, too!

During the interview with ABC’s Martha Raddatz he let the world know that he believes in a woman’s right to choose (a pro-choice Republican vice-president – that will be popular).

Flynn is decidedly “not ready for prime-time” as he gave conflicting answers to some of Raddatz’s questions.

When asked about his reaction to the shootings of black men by police in Louisiana and Minnesota, he said he couldn’t speak to the issue because he didn’t have all the details.

But, when it came to the issue of Hillary Clinton not being charged with a crime over her emails – he hasn’t seen all the evidence in that investigation either – he said she was clearly guilty and should be charged.

So, he can speak to some issues without all the details but not others?

When asked about Hillary Clinton’s response to the shootings this week, he denounced her reaction as “totally irresponsible” saying she “blamed white people” – she didn’t.

But when asked about Trump’s comments about the Black Lives Matter being “trouble, a disgrace with hate,” Flynn replied that he couldn’t speak for Trump.

So, he can speak about Hillary’s comments but not Donald’s?