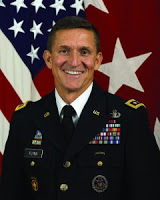 The turn toward a military figure is being driven by Trump himself rather than by his advisers, the people said, and comes as the real estate mogul is telling his friends that national unrest may demand a “tough and steady” presence alongside him on the ticket.

In Flynn, they added, Trump believes he would have a partner whom he trusts, based on their close working relationship over the course of the campaign on policy. And he likes the image of a businessman and a general coming to Washington as outsiders.

As multiple people explained, Trump is eager to rally the party around him but sees the convention and other parts of the campaign as integral to that goal, with the vice-presidential nod potentially more important in terms of what it broadly symbolizes to voters.

“Trump-Flynn. I’ve heard him say that, kind of test out the sound of it,” one person said of how Trump is mulling the possibility. “I think it’s a brand he finds appealing.”

Flynn’s formal vetting by the Trump campaign was first reported by the New York Post. In an interview with the newspaper, Flynn did not deny that he was under consideration.

“All I would say is that I have been honored to serve my country for the past three decades and look forward to serving in other ways now that I am retired from the U.S. Army,” Flynn said. “I’ve been a soldier too long to refuse to entertain any request from a potential commander in chief.”

The question might be, though, would Republicans who are already wary of Trump’s Republican bona fides buy a registered Democrat as running mate?