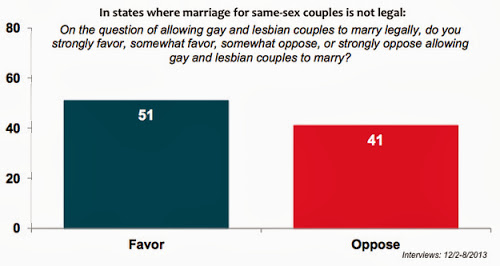 A new poll by Freedom To Marry shows that in states that do NOT have marriage equality, a majority of Americans support the right to marry the person you love.

Of the new polling, Evan Wolfson of Freedom To Marry said, “That shows the momentum. We have majority support in the non-marriage states, in the states that still discriminate. And this is the first poll to show that. It’s conveying to the court and to the next wave of decision makers that America is ready.”

In addition,  56% of the survey’s respondents believe that it is likely that marriage for same-sex couples will be legal in their state in a couple of years.