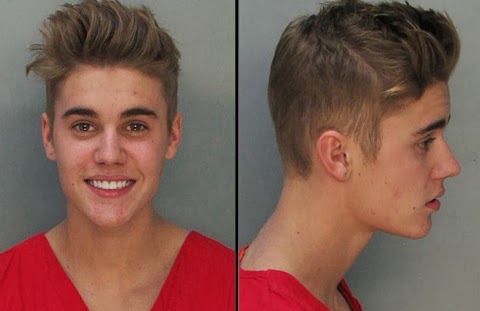 Above you see “Canadian idiot and usually late to his own concerts” recording artist Justin Bieber posing for his mug shot in Miami last night.

Bieber was arrested for DUI, drag racing, resisting arrest, driving with an expired license and some other stupid stuff that his handlers should have kept the idiot from doing.

The police report says … Bieber was defiant from the get-go, yelling
at the cops, “Why the f**k are you doing this?”  He also yelled, “What
the f**k did I do.  Why did you stop me?”

When the officer tried
to perform a routine pat down, Bieber said, “I ain’t got no f**king
weapons, why do you have to search me?  What the f**k is this about?”
Bieber claimed he wasn’t drunk and coming back from recording music.
That’s not true, because we knew he was at a club.

Now the basis
for the resisting arrest charge — Before the pat down, as Bieber got
out of the car, he “kept going into his pants pocket.”  The cop ordered
him to put his hands on the vehicle, and Bieber initially complied but
soon took his hands off the car, turned and then cussed out the cop. The
cop then grabbed Justin by the right arm, Justin pulled his arm away,
and said, “What the f**k are you doing?”

The report says Justin was driving between 55 and 60 MPH in a 30 MPH residential area.

Bieber
is now in custody and is at the police department where he is being
tested — presumably to more precisely measure his blood alcohol level.
Our law enforcement sources say Justin was given a field sobriety test
at the scene … and failed.


Aren’t we all tired of this?  WHAT do young girls see in this punk?  They think he’s “cute” so all the bad behavior is to be ignored?
Word is he could be deported if convicted of a felony charge.  His high powered lawyers and record label will keep that from happening, but we can only dream.

In related news, we should all feel sorry for Buzzfeed writer Ryan Broderick, who tweeted a screen capture of his Tweet Deck feed covered with Justin Bieber mug shots. 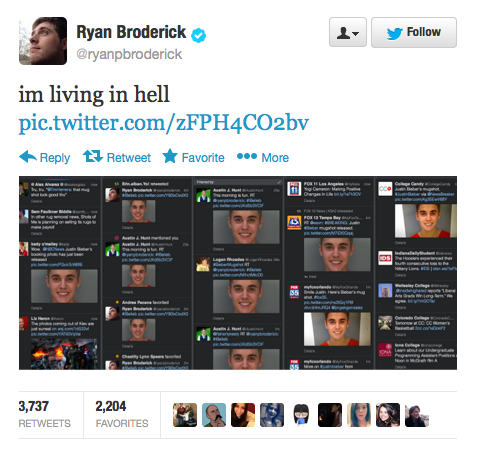