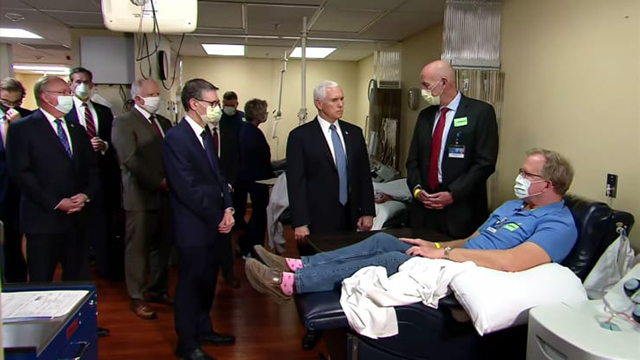 During a Fox News town hall event Sunday night with Donald Trump, Vice President Mike Pence admitted he “should have worn a mask” when he visited the Mayo Clinic earlier in the week. The Minnesota clinic requires all visitors to wear masks as a precaution against spreading the coronavirus.

Health care experts criticized Pence, currently heading up the White House anti-coronavirus effort, for not following the task force’s own guidelines in wearing a mask.

A member of the traveling press corps photographed Pence visiting with healthcare professionals and patients. He was the only person in the photos not wearing a face mask.

Reuters reports during the town hall event, Pence said, “I didn’t think it was necessary, but I should have worn a mask at the Mayo Clinic.”

Pence later said he wanted to look the healthcare personnel “in the eye” and thank them for their efforts. Fyi – face masks don’t cover the eyes.

Pence’s wife told the press he didn’t know he was supposed to wear a mask at the clinic, although several people attending the visit say they were informed of the rules the day before.

Pence explained Sunday night that, since he and Trump are frequently tested for COVID-19, he felt he wasn’t a risk to others.

It wasn’t until his appearance Sunday night that he acknowledged the symbolic weight of leaders wearing masks at this time as the death count from COVID-19 in the U.S. has surpassed 67,000.

“It’s really a statement about the American people, the way they have been willing to step forward, practice social distancing and wear masks in settings where they can’t do that,” he said.

After Pence received a backlash of criticism, his team reportedly threatened to retaliate against the journalist who released the photos showing him without a mask at the clinic.

Pence staff threatens action against reporter who tweeted about visit to clinic without surgical mask – The Washington Post https://t.co/OYQvwRnJ8L