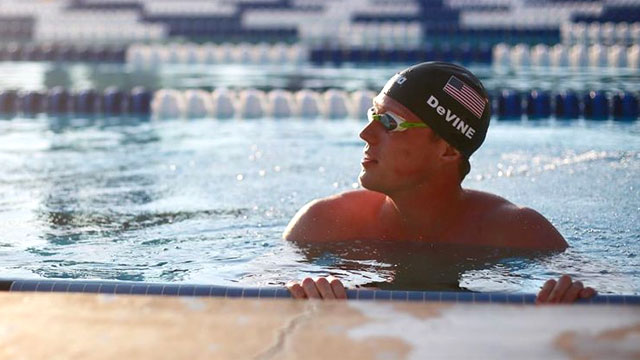 DeVine, who graduated from the university this year but is continuing to take classes, accused the Stanford Swim coaching staff of removing him from the Stanford swim team because of his sexuality.

“There are surface level reasons I was kicked off the Stanford swim team, but I can tell you with certainty that it comes down to the fact that I am gay,” wrote DeVine.

As many of you know, I’m an openly gay swimmer and I am the only one at my level. I want to use this post to call out some of the homophobia that I’ve experienced being an athlete, and encourage everyone to be thoughtful and intentional about changing some of the homophobic aspects of the athletic culture that exists today. While I have many specific examples of micro aggressions and outright aggressions that I’ve experienced, homophobia is ultimately much more than an accumulation of experiences. In fact, it is a denial of experience. While I feel like I’ve tried to convey this to many people, many of whom deny any possibility that they contribute it, I’ve started to ask myself: Why is it my job to educate coaches and athletes at the most resourceful university in the world? I cannot continue to try to engage people in this conversation when there is so much fragility to obscure my humanity and character, so much rhetoric to keep me silent. Everyone says they support me, and yet, for the millionth time, I am the only one speaking up. To my coaches who sport the pride flag on their desk, to the athletes who liked my pride photo on Instagram, I need you to wake up to what’s happening around you. How can you say you support me and my equality? How can you not see how Stanford Swim has treated me and used me over the last 4 years? Am I invisible? Plain and simple: there are surface level reasons I was kicked off the Stanford swim team, but I can tell you with certainty that it comes down to the fact that I am gay. This is a pattern. Homophobia is systematic, intelligently and masterfully designed to keep me silent and to push me out. I am a talented, successful, educated, proud, gay man: I am a threat to the culture that holds sports teams together. I want something to change, because I can’t take it anymore. My story is not unique. There are queer voices everywhere and all you have to do is listen. I am asking, begging for some sort of action. If you are reading this, this post is for you! Gay or straight, swimmer or not. None of us are exempt from homophobia. It is your civil duty to educate yourself. If you choose not to, it is at my expense.

The coaching staff of Stanford Swim issued a statement refuting DeVine’s claims and added that the athlete wasn’t being allowed to train with the team “for reasons entirely unrelated to his sexuality.”

I remember reading the story and at the time both the ‘surface reasons’ and the ‘reasons entirely unrelated’ comments stuck out as intentionally vague.

The Stanford Daily is now reporting DeVine’s “expulsion came after he drank at a Team USA swim meet instead of showing up to support his teammates who were competing, a violation of the National Team’s Honor Code.”

The Daily also makes a point to clarify that DeVine wasn’t kicked off the swim team but was “barred from the University’s pro-training group after finishing his collegiate career.”

DeVine told the Daily that while he stands by his Instagram post, he feels people focused on just one aspect of the essay and not his main point.

“I think that I wrote this entire Instagram post where every sentence is very important, but the only one that people are really focusing on is me calling out Stanford, and that makes my message sound very aggressive and that I’m out for blood, when in reality that is not what I wanted at all,” DeVine said. “I’m here to just say this is a systemic issue.”

DeVine says his message was meant to highlight what he feels is a homophobic environment on the Stanford team and to “call out” the homophobia he says he experienced.

During his time on the Stanford swim team, DeVine recalls coaches attempting to motivate swimmers by appealing to “masculine stereotypes,” and when he tried to explain why he felt excluded from the team as a gay athlete, the coaching staff would “get defensive and unwilling to listen to him.”

DeVine came out in an interview with Swimming World magazine in September of 2018.

At the time, he told the magazine he felt his teammates and coaches “received the news warmly” and expressed regret that he had struggled with deciding to come out to them.

“I remember that being a pretty emotional time, and just feeling my whole team wrap around me and feeling that love in a place where I hadn’t really felt it, that was definitely pretty special for me,” DeVine said. “Just seeing them kind of prove me wrong was definitely special, something I’ll never forget.”