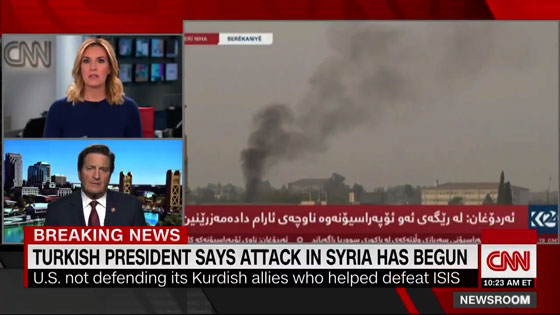 Turkey launched a planned military operation in northeastern Syria on Wednesday aimed at flushing out a Syrian militia backed by the United States, President Recep Tayyip Erdogan wrote on Twitter.

Mr. Erdogan said the operation aimed to “prevent the creation of a terror corridor across our southern border,” but provided no other information about whether Turkish ground troops had entered Syria or how far in they would go.

A spokesman for the United States-backed militia, the Syrian Democratic Forces, said that Turkish warplanes had begun carrying out airstrikes.

Turkey’s long-planned move to root out United States-allied Kurdish forces in northeastern Syria accelerated rapidly after President Trump seemingly gave a green light in a call with Mr. Erdogan on Sunday. The operation has sparked fierce debates in Washington and could open a dangerous new front in Syria’s eight-year-old war.

"There is no doubt we have to try to regain the stability that existed before the President simply gave Erdoğan a green light to do whatever he wants to do in the area," @RepGaramendi says in response to Turkey's military offensive into northeastern Syria. https://t.co/NPHAqfJviO pic.twitter.com/byfEY9aJjL


Donald Trump tweeted that he wants the Middle East to take care of itself:

Fighting between various groups that has been going on for hundreds of years. USA should never have been in Middle East. Moved our 50 soldiers out. Turkey MUST take over captured ISIS fighters that Europe refused to have returned. The stupid endless wars, for us, are ending! https://t.co/Fbcem9i55Z

Republicans in the Senate and House of Representatives underscored their opposition to Trump’s decision to move U.S. forces out of the area:

Pray for our Kurdish allies who have been shamelessly abandoned by the Trump Administration. This move ensures the reemergence of ISIS.

A Turkish military advance into Syria threatens to halt momentum against ISIS, directly assaults our SDF partners, and could give the likes of al-Qaeda and Iran new footholds in the region. Turkey should stop immediately and continue to work with the US to secure the region.