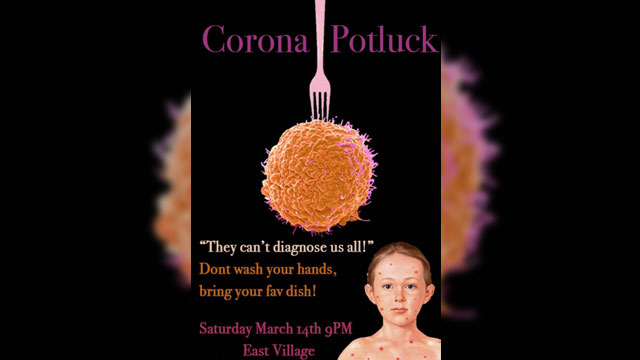 Gay conservative Lucian Wintrich, who founded ‘Twinks 4 Trump,’ decided the best way for him to cope with the ongoing coronavirus threat was to host a ‘Corona Potluck’ party at his home in New York City’s East Village.

“They can’t diagnose us all,” declared Wintrich’s invitation for the March 14 shindig. “Don’t wash your hands. Bring your favorite dish!”

The artwork for the invitation included a little boy covered with spots on his face.

Note – at the time the invitation was sent the “can’t diagnose us all” part of the invite was true as there was a shortage of COVID-19 tests available. That’s still the case in some parts of the country.

“The majority of folks I invited, if they got it, would recover fairly quickly and build up an immunity to the present form of COVID19,” Wintrich told the New York Post. “It was relatively inspired by the chickenpox parties that were all the rage in the 90s.”

In the 1990s “chickenpox parties” were a trend among parents as a way to inoculate their children against the chickenpox virus later in life. The idea was to expose their kids to disease while young so they would develop natural immunity, but the practice fell out of favor once a vaccine was developed.

Note – Medical experts haven’t confirmed if people develop an immunity to COVID-19 after recovering from the disease.

It’s disconcerting that Wintrich says “the majority” of invited friends would recover quickly. So, he invited people who he felt might NOT recover quickly?

Admitting the health threat is “serious to a degree,” Wintrich added, “I wouldn’t hang around folks over the age of 50 and risk infecting the more vulnerable.”

It’s important to note that while seniors have been identified as being more ‘at risk’ from serious illness due to coronavirus, younger people are not considered ‘safe’ from infection.

A 40-year-old attendee of the Winter Party festival in Miami earlier this month died in less than a week from complications due to coronavirus.

The Post spoke to two attendees of the party to get their perspective on the contrarian approach to the ongoing health threat.

One attendee, who asked to remain anonymous to avoid repercussions from friends and co-workers, referenced World War II as part of his rationale for taking part in the event.

“When Britain was being bombed by Nazi Germany during the blitz, they kept the f–king stores open. People went about their lives,” they told the Post. “We get a flu … and we shut everything down. … We have completely handed over our civil liberties … and anyone who wants to go out and live a normal life is semi-ostracized.”

Brian Alacorn, 24, said he went to the party because “Lucian is my friend and he texted me.”

“I thought I shouldn’t, because of the social distancing – but my friends were already outside and I just kinda went.”

The event took place after all Broadway theaters had been shut down and the governor had declared a state of emergency.

Just hours after the ‘potluck party’ ended the New York City Health Department issued guidelines telling people “even if you are not sick, stay home as much as you can: work from home, study from home and avoid all unnecessary interactions and events.”

At this writing, there have been 790 coronavirus-related deaths in New York City alone.