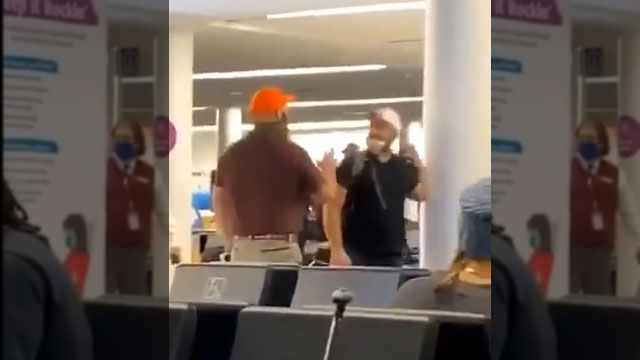 UPDATE: USA Today has fact-checked this and determined the man in the video was asked to deplane for violating the airline’s mask requirement, not because he was on a no-fly list.

In the aftermath of the insurrectionist violence perpetrated on the U.S. Capitol this past week, Rep. Bennie Thompson (D-MS), chairman of the House Committee on Homeland Security, issued a statement asking the TSA and FBI add all identified individuals involved in the attack to the federal No-Fly list and keep them off planes.

In the video below, it looks like one of the ‘identified individuals’ had just been informed he was not going to flying the friendly skies any time soon.

Says the invasion participant: “[Unintelligible] every single one of you! That’s what they do to us! They kicked me off a plane and called me a fucking terrorist! They want to fucking ruin my life!”

No doll, you did that yourself. Actions have consequences.

As one commenter wrote, it’s amazing that “they thought they could fly to DC, sleep in a hotel, stage a riot/insurrection, go back to the hotel, drink in the bar, sleep overnight, then fly back home – like it was no different than a trip to Comic-Con.”

The hashtag #NoFlyList began trending shortly after this hit the Twitterverse. I’ve added a few more of the ‘fine people’ who found themselves banned thanks to their own actions.

People who broke into the Capitol Wednesday are now learning they are on No-Fly lists pending the full investigation. They are not happy about this. pic.twitter.com/5GfHo1eVU8

It amazes me that they thought they could fly to DC, sleep in a hotel, stage a riot/insurrection, go back to the hotel, drink in the bar, sleep overnight, then fly back home – like it was no different than a trip to Comic-Con. These people have no idea of the hell they unleashed

The only way these MAGA extremists have any hope of being deprogrammed is by having to face legal consequences for their behavior and/or being publicly shamed. Nothing else seems to work. Generally though it seems they are a lost cause, lost to the cult.

Another story from people from The Party of Personal Responsibility being shocked to find that there are consequences for one’s actions.

The fuck your feelings crowd sure does cry a lot.

[Morgan Freeman as the Narrator]: “Bob believed the reaction to his attempt to overthrow the government was a little overblown. Little did Bob know, he was about to get a visit from the FBI.”

“ThEy CaLlEd mE A tERroRiSt” 🤣

Well, Cinderella, if the shoe fits🤷🏻‍♀️

MAGAt who stormed the Capitol: “You treat me like a f*cking Black person!”

These racist terrorists fully expected their whiteness to protect them from any consequences for their crimes, including murder.#NoFlyList #TrumpInsurection #CapitolRiots pic.twitter.com/HnfN44qZ2z

“I have 3 CHILDREN”
“How many?”
“4 Children!.” 🤦🏼‍♂️🤔 While y’all talking Super bowl and Armie Hammer these #NoFlyList girls from #TrumpInsurrection #CapitolRiot can’t remember their own kids🤦🏼‍♂️ and change accents 🤔 #MAGATerrorist pic.twitter.com/Tgx3CTipvE