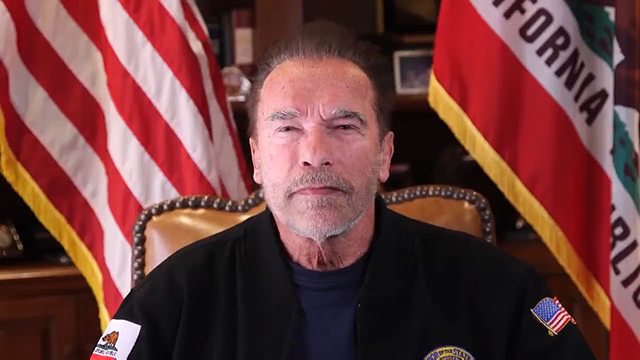 Arnold Schwarzenegger, movie star and former Republican Governor of California, did not hold back in a recent video message posted to Twitter that compares the recent invasion of the U.S. Capitol to the violent 1938 attack on Jews known as the “Night of Broken Glass” in his native country Austria.

“I grew up in a country that suffered from the loss of its democracy,” said Schwarzenegger after noting that the 1938 violence was perpetrated by a “Nazi equivalent of the Proud Boys.”

The 73-year-old former politician shared that he grew up knowing people who weren’t Nazis or anti-Semites but who “just went along” with the violence. That included his own father who he admitted would come home drunk and beat him and his mother, like other neighborhood men who were “in emotional pain for what they saw or did.”

“It all started with lies, lies, lies and intolerance,” he continued. “Being from Europe I’ve seen firsthand how bad things can spin out of control.”

“He sought a coup by misleading people with lies,” he said. “I know where such lies lead.”

He also declared that Donald Trump would go down as the “worse president” in history.

My message to my fellow Americans and friends around the world following this week’s attack on the Capitol. pic.twitter.com/blOy35LWJ5